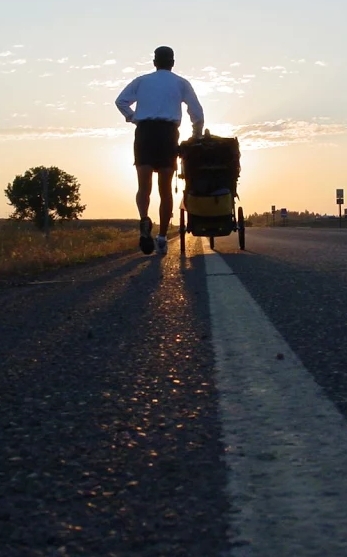 A few days ago I announced that I'm officially retired from running across states and countries. The feedback from friends and family has been very supportive. I've spent a little time thinking about all that was accomplished during my adventure running years through "PACE" (Promoting Active Children Everywhere). I wanted to share a few thoughts with you about the road I traveled.

My adventures through PACE involved over 100,000 school children worldwide who ran with me 'virtually' at their school playgrounds and gymnasiums. Their teachers had registered them to participate in my state/country running adventures. Those kids were from such countries as Germany, Malaysia, Italy, Japan, United Kingdom, Australia, New Zealand, Portugal, Scotland, South Korea, Spain, Canada, and from all 50 U.S. states -- as well as other locations on the globe.

The total mileage of my solo runs across the United States, Montana, Germany, Alaska, and the Mojave Desert is 5,386 miles -- the equivalent of 206 marathons. All totaled, I spent 184 days (six months) on the road to accomplish all of those state/country adventures -- which is an average of 30 miles per day. Of course, there was also all of the training miles! The total mileage (including training) that I logged between 2005 and 2011 in order to accomplish all of the ultra-running adventures that I did is approximately 12,000 miles (458 marathons in 6 years)... or about 22 million strides!

It's said that the average person, having an average stride length -- and living until the age of 80 -- will cover approximately 110,000 miles in his or her lifetime (which is about 4 1/2 laps of the earth). Just in my running career I've logged over 40,000 miles, which is closing in on two laps of the planet -- and I'm nearly 30 years away from being 80! I guess I'm ahead of the 'average' for miles. Based on my 'pace' for the past 51 years, it's safe to say that when my finish line of life finally arrives I'll have logged at least one-third of my life's miles by running.

Between 2006 and 2011 I did school assemblies in the United States, Europe and elsewhere. I spoke to tens of thousands of school children and have many fond memories of those moments.

As the miles unfolded, I stayed with many different families who were kind enough to take in a weary runner for the night. All of those people were an encouragement to me and helped me to get through the endless miles. Along the way, I slept in just about every accommodation imaginable!

I had a great run with "PACE" and will always look back with great appreciation for all that I was able to achieve. Now, it's time to step down life's path with my soon-to-be bride, Kelley, by my side! Life is wonderful and is always an "adventure."