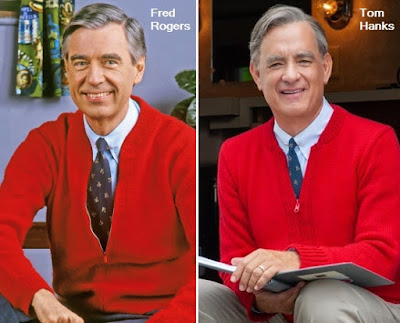 I recently realized that 2018 marks 50 years since "Mister Rogers' Neighborhood" first premiered on television. It launched in 1968 -- when I was only 3 years of age -- and is the TV show that I watched the most as a very young boy. The show aired for multiple decades, coming to an end in 2001. It was aimed primarily at preschool children, ages 2 to 5, but it was labelled by PBS as "appropriate for all ages." Today, I was happy to learn that actor Tom Hanks is going to be portraying the life of Fred Rogers in a movie slated to be released in October 2019. Earlier this year, a documentary film by Morgan Neville titled "Won't You Be My Neighbor?" was released and focused on the life of Mr. Rogers.

As a young boy I always enjoyed learning from Mr. Rogers. He would sing the little intro song ("Won't You Be My Neighbor") as he walked onto the set, put on a sweater, and changed his shoes. Did you know that all of the sweaters that Mr. Rogers wore on show were hand-sewed by his mother? In the book Life's Journeys According to Mr. Rogers: Things to Remember Along the Way, Mr. Rogers wrote:


"I've recently learned that in an average lifetime, a person walks about 65,000 miles. That's two and a half times around the world. I wonder where your steps will take you. I wonder how you'll use the rest of the miles you're given."

I'm 53 years old now and due to my long-distance running background I've logged far more than 65,000 miles so far in life. However, I appreciate Mr. Rogers' words about how far the average person walks in a lifetime... and his thought-provoking words of wondering where future steps will take you, and how you'll use the rest of the miles given... the remaining time on earth.

Mister Rogers' Neighborhood is a timeless program that teaches some valuable lessons to young children. During each half-hour segment, Mr. Rogers would speak directly to the viewer about various issues, taking them on tours of factories, demonstrating experiments, crafts, and music, and interacting with his friends. Mr. Rogers also made a point to simply behave naturally on camera rather than acting out a character, stating that "One of the greatest gifts you can give anybody is the gift of your honest self." The half-hour episodes included a puppet segment chronicling occurrences in the Neighborhood of Make-Believe. Another segment of the show consisted of Mr. Rogers going to different places around the neighborhood, where he interviews people to talk about their work and other community contributions.

A few months before his death in 2003 from stomach cancer, Fred Rogers recorded a video message for those who grew up watching “Mister Rogers’ Neighborhood.”

In just a few weeks -- on October 20, 2018 -- it will be 12 years since I ran into the Atlantic Ocean and completed my solo run across America. In the past, I've written about that adventure, and I've expressed some of the feelings and emotions that I experienced when I finally reached the ocean. Most people who know me, or are familiar with the journey, are aware that I completed the run on the Delaware coast. However, most people don't know exactly where I finished. I actually completed the coast-to-coast adventure after running down a boardwalk extending off of the Cape Henlopen State Park Bathhouse, and here's an aerial photograph of that boardwalk: 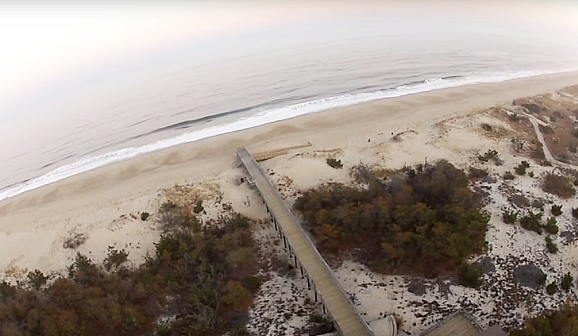 On the day that I finished the 3,260-mile run, the beach looked very similar to this photo. It was 11 o'clock in the morning and there was no one on the beach. There had been some light rain that morning, although it wasn't raining when I finished. There was a relatively gray sky which eventually gave way to sun shortly after I arrived at the beach. There were no more than about 15 people who watched me run into the ocean that day -- most standing on the boardwalk. It had taken 108 days of striding 30 miles per day, on average, to cross the 15 states to reach that beach. I didn't actually see the ocean until I started down the boardwalk. Here's what it looks like:

To see that massive ocean after running through the second hottest summer ever recorded in the United States was such a wonderful feeling. I knew that I was going to run right into it!

Yes, it has been 12 years since that experience and my life is far different now than it was back then. That run across America changed me in many ways and will always be a part of my personal history. However, today my eyes and heart are set on the future and with each step I take I'm counting my blessings... daily.

It Has Been a Busy (and hot) Summer in Indiana!

It has been a busy summer of new home ownership! If you read this blog in May of this year, you learned that I purchased a new home in Indiana and was spending the summer doing some home improvement -- which included painting the entire interior. Juggling the home projects, my work at the law firm, and wedding preparations has kept summer's pace quite brisk! However, all of it has been a blessing beyond measure!

The greatest blessing is Kelley, and finding this home with her... and marrying her... are gifts that I will treasure every day of my life. She did a wonderful job at choosing new interior colors for our home and definitely has a better eye for that than I do. Sure, there is more yet to do, but I'm pleased to say that the summer home projects that I wanted to get accomplished have indeed been checked off of my list.

It has certainly been a hot summer, and as I write this during the first week of September the thermometer is reading 92 degrees! We've been hot in Indiana since May. The National Weather Service reported that May 2018 was the hottest May on record in Indiana. That's pretty impressive when considering that the weather records go all the way back to 1871.

One winter project will be a home office renovation, which I will tackle after the new year is underway. I also have a few outdoor projects in mind for next summer, but all of that will be off my radar as we go through holidays. I'm truly looking forward to our first Thanksgiving and Christmas in the new house... as a married couple.

Between us, Kelley and I have eight children -- six of whom are adults. Kelley's two youngest daughters are ages 10 and 13. Both of them love the new house and their bedrooms, which have been put together just the way they wanted. We're looking forward to building many wonderful family memories in our home.

The house is actually the kind of home I've always wanted. It's a four-bedroom, two and a half bath home with hardwood floors, formal dining room, fireplace, and more. I love the mature trees, the large lot size, and the well-manicured lawns in the neighborhood. There is minimal residential traffic and the neighborhood is perfect for taking evening strolls. The home is also in easy driving distance to the offices where Kelley and I work, and the girls' schools.

Yes, life in Indiana is wonderful and I thank God daily for all that He has done to uplift and bless me on life's path.