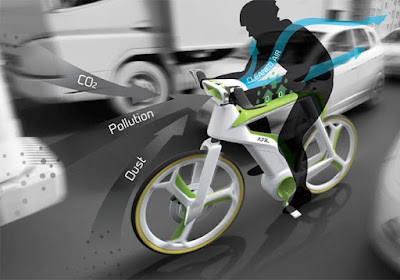 A smog-eating bike may soon be seen on the streets of Beijing, China. A Dutch design firm, Studio Roosegaarde, has announced that it is partnering with Ofo, a Chinese bike sharing program, to develop the Smog Free Bicycle. Daan Roosegaarde, who leads the studio, stated: “Beijing used to be an iconic bicycle city. We want to bring back the bicycle as a cultural icon of China and as the next step towards smog free cities.”

Beijing has an air pollution crisis and the bike proposal is the latest in a number of environmental initiatives, such as a Chinese government-led mass tree planting. The bicycle would potentially use a technology to inhale pollution, then release the cleaned air around the rider via a system that replicates the process of photosynthesis of trees. However, as I wrote about earlier this month, bike sharing programs in China are facing significant hurdles.

So, how does the bike work? While pedaling, thanks to the reaction between the electric current, produced by the mechanical action of the pedals, and water, contained in a small tank located under the rear seat, the air passes through the filter in the front of the bike, where it is cleaned before it is delivered to the rider. When the bike is parked, the functions of air purification may continue on battery power.

China, where “smog red alerts” are frequent, has pollution-based smog that has been known to shut down factories, curtail scheduled commercial airline flights, and close highways. The smog problem in China is due to several factors, including run-of-the-mill pollution from traffic and industry. In the past several years, Chinese schools have been closed at an increasing rate, farmers have struggled because sunlight has been so severely blocked by the smog, and all kinds of health problems (from cancer to respiratory issues) have spiked -- all due to pollution. Could the Smog Free Bicycle be a contributing solution to the pollution problem? Many hope so. 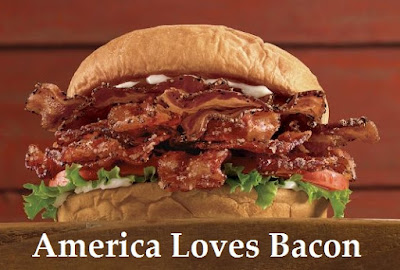 Pig farmers can't keep up with Americans' demand for bacon. Frozen reserves of bacon are at a 60-year low (and if you're like me you're surprised to learn that there are actually frozen reserves of bacon!). Just in the past three years Americans' bacon consumption has increased 14%. The national hog herd actually hit a seasonal record high this year with 71.7 million hogs, which is 3 percent more than the previous year. However, that still might not be enough to satisfy America's craving for bacon.

You can walk into just about any fast-food restaurant and see various menu items that contain bacon, and some of them are piled high with it! For instance, Arby's has bacon sandwiches and Burger King has the "Bacon King."

As a result of Americans devouring bacon, the price for pork belly (the part of the hog used to make bacon) has skyrocketed by 80%. Sixty-eight percent of bacon’s calories are fat, with half of that fat being saturated -- and statistics show that the average American eats about 18 pounds of bacon a year. C'mon America, choose a salad every once in awhile!

So, just how bad is this craving for bacon? Well, it must be pretty bad since there is even J&D’s Power Bacon Deodorant, which will let you smell like bacon! To that I just shake my head and ask... WHY? Yes, it's a real product and is currently available online through Walmart for $14. Here's the product description:

"Power Bacon Deodorant is designed specifically for those with active lifestyles or people who just sweat like pigs. Using Power Bacon will probably make everyone drawn to you like you were the most powerful magnet on Earth. And by everyone, we mean friends, acquaintances, beautiful strangers, dogs, bears, swamp alligators, lions and even pigs. Its like an aphrodisiac for your armpits. But use your new power wisely, because with great bacon power comes great baconsibility. For all day meat-scented protection, apply liberally to your underarms or private areas. Do not eat or hike in the woods without a firearm while wearing Power Bacon."


I'm still shaking my head over this!

China is Getting Buried in Bicycles

A bikeshare business in China is causing major havoc because cyclists are abandoning their bikes anywhere they want. Authorities are considering new regulations to curb the chaos — from capping the number of bikes to even barring people they consider too small or too big for bicycles. 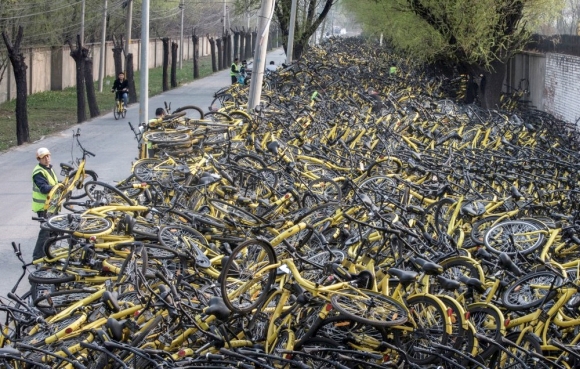 Unlike the docking station systems in cities like London, Paris, or New York, the bikes in China can essentially be found and left anywhere. In China, riders can grab a yellow, blue, green, or orange bike by opening a smartphone app and pointing their camera at a QR code that releases a lock for as low as 1 yuan (15 US cents). Once the ride's over, they simply park the bike and apply the lock.

Approximately 30 different providers have placed more than 3 million bikes on China's streets. There were 19 million users of shared bicycles in China during 2016 and that number is expected to rise to 50 million by the end of this year. But many users of these bikes simply leave them in the middle of sidewalks or abandon them on freeways. In recent weeks, police around the country have impounded thousands of bikes that were discarded. But companies plan to put thousands more on the streets.

Road laws in China ban children under the age of 12 from riding bicycles on public roads, but children are frequently seen riding the bikeshare bikes to school. 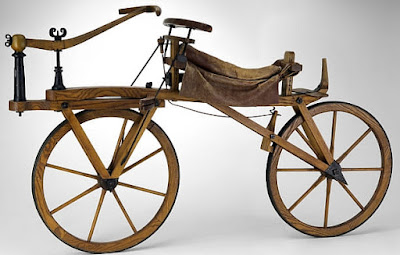 The first bicycle ride occurred on June 12, 1817, with the rider covering 8 miles in less than one hour. The bike was constructed almost entirely of wood and weighed 48 pounds. It had brass bushings within the wheel bearings, iron shod wheels, and a rear-wheel brake -- but no pedals!

Recently, the Star Tribune in Minnesota, printed an article about the start of the bicycle 200 years ago. I want to share with you some of the information from that writing. In 1817, Baron Karl von Drais, a German, invented a two-wheeled, human-powered device that a rider could straddle and propel by pushing on the ground with his feet. Later tweaks added pedals and cranks. Thus, the bike was born.

As early as the 1880s, bicycles were promoted as a form of exercise. Women, though, were warned away, told that cycling could injure reproductive organs. Some brave females rode anyway, especially after the development of the “safety bicycle,” with equal-sized front and rear wheels, driven by a chain.

Bicycling’s beginnings were riddled with safety challenges. Bikes were expensive and sometimes dangerous status symbols, with nicknames like “boneshakers” and “dandyhorses,” and were ridden by fashionable, well-off daredevils. Over time, better roads and bikes meant the benefits of riding on two wheels outweighed the risks. Today, we know bicycling is good for the heart, brain, muscles and bones. The term "bicycle" was coined in France in the 1860s. 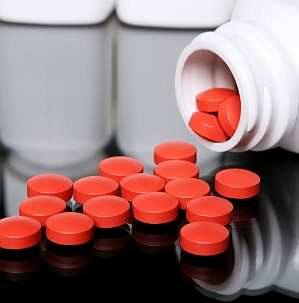 According to a study by researchers at the Stanford University School of Medicine and several other institutions, people who take ibuprofen while running very long distances double their risk of acute kidney injury. The Stanford study, published earlier this month, has received quite a bit of attention. However, it's really not 'new' news. The topic of ibuprofen and kidney injury has been circulating for quite awhile in ultra-endurance circles and elsewhere.

I've trained thousands of miles for ultra-endurance endeavors, and have run solo across states and countries. There have been countless times when my muscles and joints were sore and aching, but I opted not to lean on ibuprofen or other painkillers. I aimed for relief through self massage, stretching, hydration, electrolyte replacement, and applying ice/heat as needed. Rather than mask the pain or seek temporary relief through a drug, I preferred to manage the pain with a hands-on approach. Based on Stanford's recent study, it appears that I made a wise choice!

Apparently, as many as 75 percent of ultramarathoners use the nonsteroidal anti-inflammatory drug (NSAID) ibuprofen. In recent years, ultramarathon races have increased in popularity with the number of races worldwide reaching about 1,400 with over 70,000 runners finishing these races every year, the study said.

It needs to be kept in mind that this study’s conclusions are for endurance athletes.

Acute kidney injury is common in ultra-runners due to the high rates of dehydration that cause reduced blood flow and rhabdomyolsis — a breakdown of muscle tissue that leads to the release of muscle fiber contents into the blood, which is harmful to the kidney and often causes kidney damage. In fact, acute kidney injury has been recorded in 34 to 85 percent of all ultramarathoners, the study said. The study shows that adding ibuprofen into this mix further increases the danger of kidney damage.

Would You Lick A Toilet? Reusable Water Bottle Germs Compare!

TreadmillReviews.net did extensive laboratory testing on twelve refillable water bottles that were used by athletes over the course of one week. The testing revealed a buildup of bacteria that can be dangerous. On average, the plastic bottles contained more than 300,000 colony-forming units of bacteria! Many of the bacteria have been linked to skin infections, pneumonia and blood poisoning. The researchers said that the amount of bacteria found on the reusable water bottles is comparable to the germs you would find on a toilet seat. Yuck!

The researchers tested water bottles with a variety of lid types, including slide-top, squeeze-top, screw-top and straw-top. Bacteria measurements are in Colony-Forming Units (CFU) per square centimeter. The slide-top had the worst results, while the straw-top had the least CFU. Here's how the four measured up: 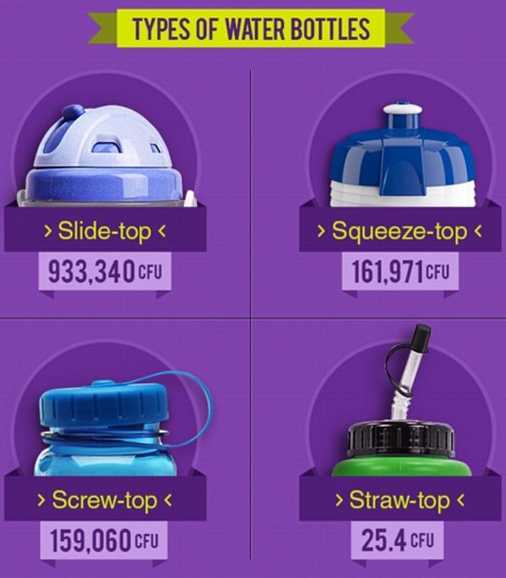 The straw-top is believed to have the least amount of germs because water drips to the bottom of the straw instead of sticking around at the top attracting bacteria that thrive on moisture. The researchers say that stainless steel water bottles, or even glass bottles, are optimal for a number of reasons. Not only do they harbor fewer germs, but they don't leach toxic chemicals into your drink.

Plastic water bottles, especially when exposed to heat or sunlight, are known to leach endocrine mimicking chemicals such as BPA (bisphenol-A) and phthalates. Endocrine mimickers, or hormone disruptors, interfere with the body's natural sex hormones, leading to an array of health problems, including: infertility, early puberty, cancer, thyroid problems, and more. Even low-dose exposure to these chemicals can significantly affect your health.

Running vs. Bicycling: 40 Miles of Comparison 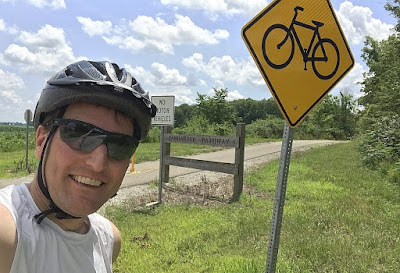 Earlier this week I did a solo 40-mile bicycle ride in north central Indiana on an 86-degree day. As I cycled along, taking in the rural sights, I began to think about the differences between running and cycling.

In years past, I would go for a 40-mile solo run and it would take as much as 7 to 8 hours to complete. I completed the leisurely 40-mile bike ride in about 3½ hours... and that was with many stops to take photos along the way. I've done so many solo journey runs of hundreds and thousands of miles, and a 40-mile day was common. However, there is far more ease (both physically and mentally) cruising along on a bike -- especially when my body doesn't have to carry a water pack or push a support stroller of gear, as I would do on my journey runs. The 3½ hours to cover 40 miles went rather quickly and I accomplished the distance in less than half the time it would have taken me by running.

Bicycling magazine recently published an article outlining 7 reasons why cycling is better than running. I read that article and the 'runner' side of me got a bit defensive, wanting to debate some of the points raised in the article. However, as I cycled along on my 40-mile ride, I realized that there is a lot of truth to what is in the article. I want to share some of the comparisons raised by Bicycling magazine.