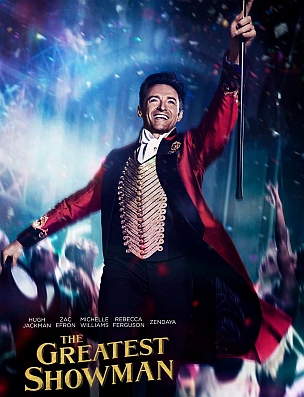 The last movie that I watched in 2017 ended up being the best movie I saw during the year. In fact, it's one of the best movies I've ever seen. It's not often that I make a prediction about a movie, but I believe this movie will win many Golden Globe and Tony awards, and it is one that I definitely want to buy the soundtrack of. The movie I'm talking about is "The Greatest Showman" starring Hugh Jackman as P.T. Barnum.

I won't give away any of the story line, but I will say that P.T. Barnum's circus, as shown in the film, featured human "freaks," "outsiders" and "oddities." The Bearded Lady; little person "General Tom Thumb;" the world's fattest man; and, the "Irish Giant" (the tallest man in the world) -- were all featured in Barnum's shows. Not all who have seen this movie are supportive of it featuring the "disabilities" (as some call them) of these people's differences to the norm of society, particularly by a man profiting from such differences. I will not get into my views about that, but I will say that I can relate, at least to a degree, to the looks and stares that some of these "oddities" received as a result of their being different from society's norm.

Back in 1985, when I was 20 years old, I announced that I was going to run across America. A local newspaper printed a story of my planned coast-to-coast run and as a result... I lost some dear friends. You see, they couldn't grasp my belief that I could accomplish such an undertaking. I was laughed at by best friends and eventually made an outsider by friends I had throughout my teen years. When I was injured in 1986 during my first attempt to run across America and was unable to finish it, I was laughed at even more by these once-upon-a-time "friends." As the years went by, I always believed that I could run across the country. However, even some members of my extended family told me it was "nonsense" and that I would never do it. In 2006, at the age of 41, I proved all of them wrong by accomplishing a solo 3,260-mile run from the Pacific Ocean to the Atlantic Ocean in just 108 days.

Along the way, there were occasions when I was called names and belittled for what I was doing. Some yelled "Get a job!" while others told me that I was crazy, out of my mind, and a lunatic. One elderly man even told me that I had the brain of a scarecrow. When I was two-thirds of the way across the country, I gave a presentation at the world-renowned Mayo Clinic -- only to be told the very next day by someone associated with that famous hospital that I was "not normal" and that I shouldn't be able to do what I'm doing. I was spit on, had things thrown at me by passing motorists, and was run off the road by people deliberately swerving cars at me. Getting across America by running 30 miles per day solo was a challenge beyond anything I could have ever imagined. However, I succeeded -- and then I went on to run solo across Montana, Alaska, Germany, and the Mojave Desert.

As I was completing the run across the Mojave in 2011, I was told by someone that I had known for 25 years that they didn't understand the running part of my life and that I wasn't normal, because in that person's limited perspective "normal people" don't do the extreme running adventures that I had been accomplishing for many years. That person clearly never truly knew who I was, even after 25 years. Yes, there were many times during my running endeavors that I felt like a freak, outsider and oddity -- running more than the marathon distance every day while pushing gear, food and water in a yellow jogging stroller. However, I ran on... knowing that even though most people couldn't relate with my ability and purpose, I believed in myself and in what I was doing.

What many are considering to be the anthem of The Greatest Showman movie is the song "This Is Me." As I heard this song for the first time in that dark theater, my eyes welled. I thought back to all of the painful, lonely miles... pounding myself into the ground along side roads in America and Europe. The song includes these words:


When the sharpest words wanna cut me down
I'm gonna send a flood, gonna drown them out
I am brave, I am bruised
I am who I'm meant to be, this is me
Look out 'cause here I come
And I'm marching on to the beat I drum
I'm not scared to be seen
I make no apologies, this is me

I ran with words like that in my heart, and to hear those words in the movie truly resurfaced feelings that I dealt with as I ran through countless small towns where I would receive curious looks by people who wouldn't approach me but would convey with just one look how 'odd' they perceived me to be. In the movie, P.T. Barnum states "No one ever made a difference by being like everyone else." I hope all of the running I've done across states and countries to promote youth health and fitness made a difference... even in a small way. I retired from extreme ultra-endurance running in 2016 and now blend into society. Most people who meet me have no knowledge of my accomplishments, and aside from my website and this blog, I generally don't offer information about the mileposts that I've reached for. Suffice it to say, I am truly just another face in the crowd these days -- and I'm okay with that.

The new year is stretched out in front of you. Make it the very best that you can... and step out into each day with confidence, commitment and conviction -- showing the world 'this is me.'