None of My Solo Runs Across States and Countries Were "Stunts" 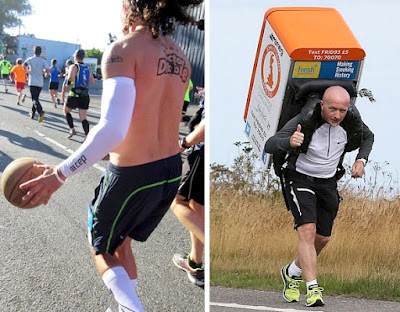 When I was doing all of my solo runs across states and countries pushing a jogging stroller of gear, food and water, I had many forms of media report on my endeavors. I never once sought out media attention, but would grant interviews if I was approached. One of my B.A. degrees is in journalism and I found it rather surprising (and disappointing) how many reporters wrongly reported information about me. I had instances when my name was reported completely wrong. I had my hometown listed incorrectly, and my occupation inaccurately stated. Often, the facts of my mileage and route were wrong, and quotes attributed to me were not quite what I actually said. In other words, I was the topic of some rather sloppy reporting as I ran thousands of miles here, there and everywhere. However, I always brushed it off because I wasn't on the roads to gain publicity.

I often found it interesting what words reporters would choose to describe my running endeavors. They used such words as epic, adventurous, amazing, and unbelievable. They would report my running as being challenging, unfathomable and super-human. Yet, there was one reporter who opted for a word that I didn't care for at all, and everything in me wanted to contact that reporter and tell him that his descriptive word was completely wrong, but I resisted. That reporter called my running across states and countries a "stunt."

A "stunt" is something done to show off, to gain attention, or to seek publicity. I wasn't aiming to do any of those things. In fact, the reporter who used the "stunt" word contacted me for an interview. I didn't knock on his door with the aim of showing off, gaining attention, or seeking publicity. The readers of that particular newspaper were painted a picture of a "stunt" by a long-distance runner pushing a bright yellow jogging stroller along the highway. I felt that it belittled my efforts and presented my running as nothing more than a one-foot-in-front-of-the-other spectacle.

There are certainly "stunt" runners in the world... such as "Doctor Dribble" who dribbled a basketball throughout the entirety of the 2014 Seattle Half Marathon, or "Tony The Fridge" who ran the length of Britain in 2013 with a fridge on his back -- only to be taken to a hospital with spinal injuries. However, I never sought publicity and was certainly not attempting to show off. I simply pushed a yellow jogging stroller every step of my journeys because it was an effective way to be self-supported as I ran from border-to-border, or ocean-to-ocean.

I certainly hope that as the years go by my running endeavors to promote youth health and fitness don't simply fall into the category of a "stunt." My efforts were far from that and my genuine heart for each endeavor was to place attention on declining youth wellness. I can only hope that is how my journeys will be remembered.