Adventures in Dadhood -- 27 Years of Parenting in the 'Hood' 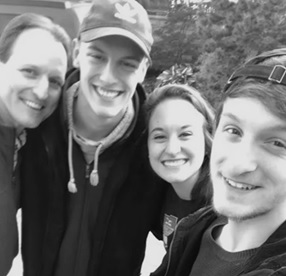 I love being a Dad. It has been one of the greatest joys in my life for the past 27 years. I'm blessed to be the father to four adult children (ages 20-27) and four stepchildren (ages 12-23). My parents raised seven children and I knew from a young age that I wanted to be a dad. When I was 28 years old, my first child was born... and the adventure in Dadhood began!

I equate becoming a parent similar to taking on a professional position after four years of college. No matter how prepared you think you are, you're in for an awakening to reality. Just like reading about work scenarios in books isn't the same as actually dealing with them in a professional environment, reading the "What to Expect" guides on parenting doesn't truly prepare you for what you'll actually experience. It isn't until your feet are in the fire, so to say, that you actually have your eyes tossed wide open to the real life responsibilities and commitment needed to properly and successfully raise a human being from the drooling, crying, bottom-wiping phase to the high school graduate crossing the stage... and crossing into adulthood.

When I became a father, I was unemployed. I had left the world of elementary school teaching and completed a second Bachelor of Arts degree in journalism. Literally one month after obtaining that degree, my eldest daughter was born -- two months premature. After three weeks in the neonatal intensive care unit, she was finally able to go home. That's when things got very real. I was able to obtain a job in a law firm and the adventure in Dadhood was underway. Over the years, I was blessed to become the father of another daughter, and two sons. Dadhood became an epic adventure, far greater than any other adventure I've ever experienced in life. It was always a blessing, frequently exhausting, sometimes challenging, and never a regret.

There were some heart-wrenching situations along the way -- such as deaths of loved ones, divorce, and going in different directions. However, the love I have for my children has never wavered. In 2015, I was blessed beyond measure to meet the woman I would eventually marry in 2018. Today, she is the mother of four children ages 12, 15, 22 and 23. Upon our getting married I entered into a new 'hood' -- Step-Dadhood! What I've learned over the past years is that this 'hood' isn't much different than the Dadhood that I've been in for 27 years. Sure, there are some differences between Dadhood and Step-Dadhood, but there are many sights, sounds and experiences that are the same in both 'hoods.' I'm learning the Step-Dadhood life and am incredibly fortunate to have two young ladies at home who are understanding and forgiving when I make mistakes.

Yes, I love being a Dad (and Stepdad!). My life in the Dad arena is in two 'hoods' simultaneously, and the blessings that come from that are incredible.