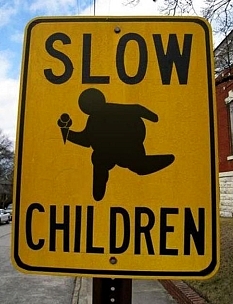 A recent research study indicates that if all the children of the world competed in a race, the typical American child would finish next to dead last. Grant Tomkinson, an associate professor of kinesiology at the University of North Dakota and an international researcher, says average American children rank as some of the least aerobically fit in the world.

His study, examining physical fitness among youth ages 9 to 17 in 50 countries, was published in September's British Journal of Sports Medicine. Tomkinson said the study defined aerobic fitness as the ability to engage in prolonged, exhaustive exercise, which he says is the best indicator of physical health.


"Your fitness level is an important indicator of how healthy you are now and will be in the future. If you are generally unfit now then you are more likely to develop conditions like heart disease later in life. While you can be fit in different ways, not all types of fitness relate well to health. The most important type of fitness for good health is aerobic fitness, which is your ability to exercise vigorously for a long time. I have long been fascinated by the question of whether today’s young people are fitter than their parents or grandparents were when they were young, and have spent the past decade or so gathering historical fitness data on over 75 million young people from 50 countries dating back to the mid-1800s trying to answer it. Using a systematic review strategy and novel mathematical techniques, my research was the first to conclusively show that young people’s aerobic fitness has declined worldwide since about 1975. Young people today are about 15 percent less aerobically fit than their parents were when they were young. And to make matters worse, it is likely that the largest declines have occurred in young people with low fitness."