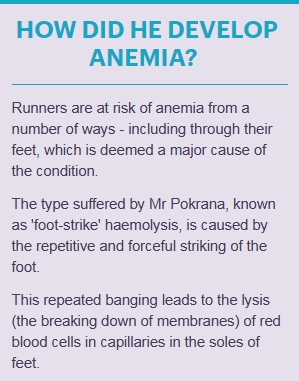 I've shared many times in this blog that my 40-year running career involved about 50,000 miles (with many solo adventures across states and countries). I'm about to turn 53 years of age and am pleased to say that I don't have any serious after effects from all of that intense pounding.

In long-distance endurance athletes, trace gastrointestinal bleeding and plasma volume expansion are sources of mild anemia (often called ‘runner’s pseudoanemia’). However, repetitive forceful foot striking can lead to blood cell lysis in the feet, resulting in a mild macrocytic anemia and intravascular hemolysis. A macrocytic class of anemia is an anemia (defined as blood with an insufficient concentration of hemoglobin) in which the red blood cells (erythrocytes) are larger than their normal volume. Hemolysis is the abnormal breakdown of red blood cells, either in the blood vessels (intravascular hemolysis) or elsewhere in the human body (extravascular).

I recently read about Christopher Pokrana, age 41, who was told that his repetitive forceful foot striking was to blame for his hemolysis... the destruction of red blood cells. According to a medical case report, this then led to mild anemia because of the rapid obliteration of his blood cells.

Mr. Pokrana followed all advice including changing his running shoes every 500 miles -- as guidelines recommend. However, he had embarked on an intense training regimen, logging as much as between 50 to 100 miles in his individual training runs.

His condition intrigued doctors in Virginia and was recently published in the BMJ Case Reports -- a prestigious journal for medical tales. Mr. Pokrana's physicians stated that his intravascular hemolysis was most likely due to repetitive foot striking associated with his long-distance running. Without treatment, anemia can be life-threatening.