To Me, It's Not "Just a Hat." In Fact, It's a Significant Reminder. 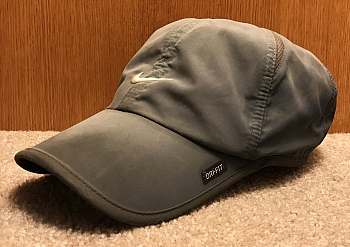 When I ran across America in 2006, I wore the same running hat every day. It was brand new and dark blue when I started the run, and over the course of 3,260 miles through the second hottest summer ever recorded in the U.S. it faded greatly! Like various items around my house from adventure runs I've done, my hat from that cross-country run is one of the things that remind me of what I've endured. I'm sure there are those who see just a hat and nothing more. However, for me, I see something that helped to shield and protect me from the elements as I journeyed solo from one ocean to another ocean.

The Nike Dri-Fit Running Hat was perfect for that coast-to-coast endeavor 12 years ago. Nearly every picture of me taken during that run shows me wearing the hat. There are only three photos showing me without it -- one was on the side of the road in 100+ degree temperatures showing how sweaty my hair was; one was taken at the home of a host family when I was showing how long my hair was getting; and, the third photo is of me running into the Atlantic Ocean with the hat in my hand raised above my head. Aside from those three moments, every photo has me wearing that hat.

So, why would I write a blog post about a hat? Does a hat really need to have a few hundred words written about it? Well, those who know me are aware that I spent most of my 40's beneath a hat. I'm about to turn 53 years of age and for the past several years I've only worn a hat a few dozen times. I retired from adventure running in November 2016 and these days I prefer to spend my active time on a bicycle wearing a bike helmet.

The particular hat I wore across America was a daily necessity, much like my running shoes. I felt somewhat naked without it and it became part of my 'image' as an ultra-endurance adventure runner. Believe me, I tried several different hats before choosing to run across America in the Nike Dri-Fit hat. It was just the right fit for me and as I conquered the 15 states it became molded precisely to my head. In fact, I can slip it on even today and I immediately recall the feeling of running with it through the seemingly endless miles. 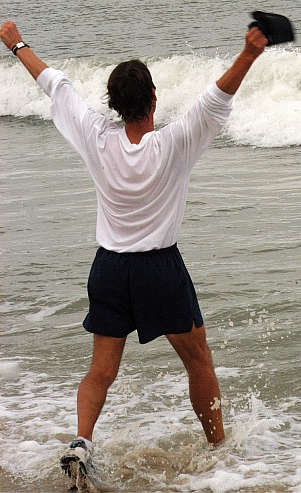 I think all athletes have a particular piece of equipment that is special to them. Aside from the support stroller that I pushed every step of the way, I would say that my hat is something that is quite reflective of the miles conquered. You see, as I spent nearly 4 months running through the summer heat, my skin got darker and my hat got lighter. The miles slowly changed the initial appearance of my body... as well as what I was wearing. Nothing got more direct sunlight than my hat, and it definitely shows that -- particularly to those who can see it in person and look at how dark blue the inside of the hat is that wasn't exposed to the sunlight!

As I write this, wearing that 12-year-old hat, I can nearly hear the ocean waves that I ran into on October 20, 2006. I gripped the hat in my right hand and held it up in victory. I had achieved my biggest running dream, experienced my own personal 'Olympics,' and had become the fifth person in history to run solo ocean-to-ocean across America. Odd as it may sound, that hat helped me to succeed. It will always be a reminder of the 6 million strides I endured.