Chasing a Promise -- Coast to Coast!

In December 2006, Running Times magazine wrote an article about my coast-to-coast running adventure. That magazine has since been acquired by Runner's World magazine and the article is now a part of its Web archive. I want to share it with you.


Chasing a Promise
Promoting Active Children From Coast to Coast 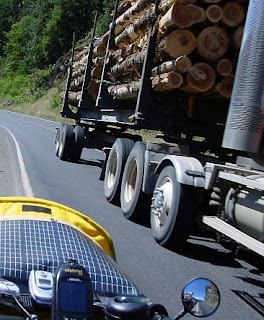 Its a picture perfect late fall day in Central West Virginia and a lone runner pushing a jogging stroller makes his way along the shoulder of US Route 50. Just after he passes a yellow advisory speed limit sign that reads "15 MPH" the shoulder disappears and he pulls the stroller off the road and crouches, tucked into the 2 feet between the sheer rock wall and the winding highway as an overloaded logging truck barrels past him down the 9% grade. He waits until his pounding heart is the only sound he can hear before he jumps back onto the road and pushes his loaded luggage around the blind turn as fast as he can.

The runner was Paul Staso and the jogging stroller was loaded with water, food, clothes, camera, GPS, satellite and cell phones, tent, sleeping bag and other essentials. Between June 23rd and October 20th 2006, Paul ran, alone and unaided, from the Pacific coast in Oregon to the Atlantic shoreline in Delaware - a total of 3,260 miles. It is easy to define Paul’s journey by the bookends provided by these natural boundaries, but that would be oversimplifying the accomplishment. For Paul, the start and finish of the trip were just two of the 108 days of the journey. The other 106 days, while the rest of us worked, ran tempo workouts and local 5K races, cooked dinner for our families and socialized with friends, Paul was somewhere between those two great oceans, alone, running. 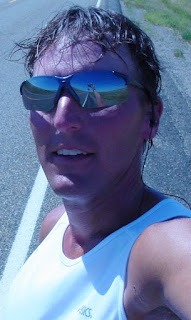 Across the Great Plains, the summer of 2006 was one of the hottest on the record. In the first half of his journey, from Cannon Beach, OR to Appleton, MN, Staso witnessed only 35 minutes of rainfall. While Dakota farmers were losing crops and livestock to the heat and drought, Paul was running in the sun for up to 48 miles/day. His route took him across some of the least populated regions in the country - western Washington, Montana, North and South Dakota. Drinking fountains are hard to come by in areas where houses are miles apart (never mind how widely spaced the towns are), so he carried 2.5 gallons of water with him as well as food to get him through the day. "Eating and drinking was a constant activity," Paul said. "Out West, I couldn't carry anything cold, or chocolate, because it would melt... further east I would stop and actually have lunch somewhere."

There was only one day, Paul said, that he would have quit. But at the time quitting wasn't an option. He had run 25 of the scheduled 35 miles for the day when he came to the top of a bluff in the Standing Rock Reservation in South Dakota. From this vantage point he could see clear to the horizon, and he sat down and started to cry. What was it that brought tears to his sun-scorched eyes? "I saw nothing," he recounted. "No trees, no cars, no houses. And I thought 'Can I really do this?'" 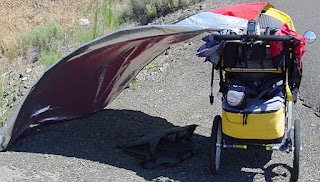 He made a lean-to with his tarp to get out of the direct sun and he sat down and cried. "It was really frustrating," he said. "My emotions just started to break and I couldn't stop. It just hit me like a ton of bricks." Over an hour later, he was finally able to pack up and return to the task before him because another 10 or 11 miles down the road was a place to lay his head and there was no way to get there except on his own two feet.

He struggled along for a few days after the Standing Rock breakdown, but the curative effects of the accumulating miles started to kick in and he got back into the swing of things. Minnesota, he says, is when it really felt like he was going to make it.

At this point, you might be asking yourself, now why-ever would a grown man, with four kids and a full time job he likes go so far out of his way as to dedicate four months of his life away from said family and job to create such agony as has been previously described? You might be wondering why he took such an odd, difficult and twisting route to get between points A and B (this was the most northerly cross country run and the first to end in Delaware). As Paul will explain to you again and again, "it was all about the kids." 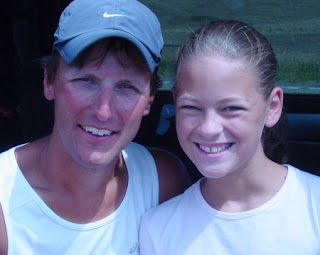 The plan for a cross country run was hatched at bedtime one evening, as he was tucking in his 12 year old daughter, Ashlin. Paul and Ashlin realized that the kids at her school would be much more likely to run if they had a goal in mind so they started brainstorming places to which the kids could "run". Paul recounted his first attempt to run across the country in 1986 (he only made it 36 miles due to an unfortunate injury). They did some calculations and determined that if each member of Ashlin's 5th grade class were to run 2 miles/week, they could complete a virtual cross country run in the course of the school year.

Paul challenged the 4th and 5th grades at Russell Elementary School in Missoula, MT. If either one of the classes could complete the virtual cross country run over a school year, he would run their actual cross country route that summer. Ashlin chose the route to go through parts of the country that she was interested in and as she and her classmates ticked off the miles at school, they traced their progress along the way, learning about the cities and states that they were passing through. By the end of the school year, both classes had completed the route and each student had run the equivalent of three marathons.

Was it ever in doubt that the classes would reach their goal? "Oh yes, yes," Paul said. But one day near Christmas, he came by the school -- it was zero degrees and snowing -- and saw the 5th graders out there, circling the track. He knew then they were going to make it.

In that same frigid Montana winter weather, Paul started picking up his training as well. He had a promise to keep to 97 grade school kids, and he needed to be in shape to run across the country come summer. 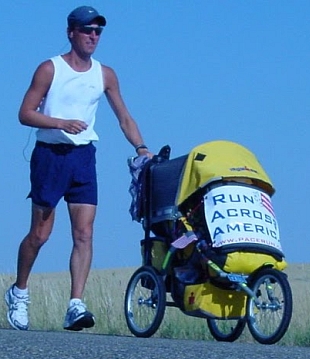 Rising early to try to beat the heat, ("That never worked!" he said.) he would ease his body into each day's task with three miles of walking, then break into a trot for awhile before he really got to work. He didn't want to be rigid in a schedule so he would let the weather and terrain dictate his pace and rest breaks. Along the way he stopped and talked to groups at several grade schools, YMCAs and sports teams. He sought no media attention but reported back to his friends and family in Missoula as frequently as he could.

His feat garnered much criticism along the way. Some thought him a fool for trying it alone, or in the middle of the summer, or along the winding route that Ashlin had chosen. Some wondered why he wouldn't contact larger media forces and try to make a bit of profit along the way. He was run into ditches, verbally accosted and spit upon. One straight-speaking old man in North Dakota stopped him asking, "What are you doing?" "I'm running across America," came Paul's reply. "Young man, you've got the brain of a scarecrow."

"But for every person who wants to hinder you," he explained, "there's far more who encourage you and want to help however possible." And then there's that commitment to the kids back home -- they did their part, now he was doing his. One of the girls in the class reported to the school's PTA president that this was "the first time an adult has kept his promise to me." "Now that's a huge impact," Paul insisted, "there's a ripple effect there."

Paul frequently receives emails from kids in the class and elsewhere excitedly reporting that they are still running, or that they are going out for the cross country team this year, and teachers and schools across the country contact him about starting a similar virtual running program at their school. These are the reasons that Paul did the run, these are the stories that kept him going through heat, bugs and storms. 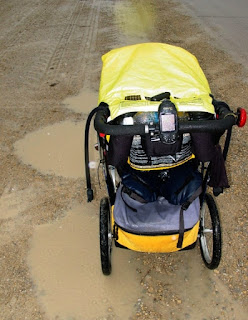 Despite crossing several mountain ranges, logging trucks spraying bark as they pass on narrow Idaho highways, and hundreds of miles of open prairie, it was the rolling green cornfields of Iowa that presented the toughest challenge to Staso. "All the shoulders are gravel," he explained, "the stroller stopped tracking straight." 290 miles of running on gravel shoulders left him with missing toenails and bruised feet that made standing painful -- never mind 44 miles of running in a day, or 16 miles through ankle deep puddles during a flash flood. "It didn't rain many days," Paul said, "but when it rained, it really rained!"

This summer, Paul Staso got a chance to see the best and the worst this country has to offer. He was victim of an attempted robbery, recipient of many a plate of lasagna, spare change from strangers and inquisitive questions from kids he met along the way. He ran through hail, thunderstorms, heat waves and perfectly cool, sunny fall days. He saw the spectacular views of the Cascade, Rocky and Appalachian mountain ranges, feasted his eyes on the sparkling expanses of the Susquehanna, Mississippi and Columbia Rivers and couldn't help but notice the continuous trail of trash lining the roads that became his home for those four months.

It's the little things, Paul says: show your commitment, keep your promise and respect your body. This is the message he wants to promote to kids and adults everywhere.