Have You Ever Had The Words "Get a Job" Yelled at You? 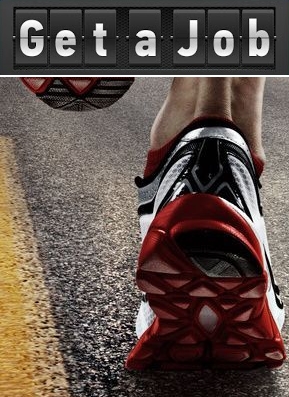 I recently read about a married man (over 20 years younger than I) who has quit his job in order to run across the United States, stating that he is "...leaving a great job behind permanently, and no guarantee that another will be waiting for me when I finish."

When I ran across America solo in 2006, I was the father of four children (ages 6 to 13) and operated my own business. Included in the gear on my support stroller was a laptop computer, which I used at the end of each day to communicate with subcontractors and to keep my business operating -- even sending out client invoices at the end of each month. Most people who encountered me along the route simply saw a guy along the edge of the road with a stroller -- and I think some believed I was homeless. I remember being only a few hundred miles into that USA run when a guy, younger than I, yelled across the roadway "Get a job!" I glanced at him, and kept running... thinking to myself that he has no idea that I'm running over 3,200 miles just to keep a promise to some school children, that I am the father of four kids, and that I'm operating a business from the edge of the road as I cross the country. To that young guy, I just looked like some sort of athletic apparel wearing drifter.

Over the past 12 years since I completed that coast-to-coast run, I've heard of many people who have left their jobs to attempt a run across America. Some have fallen into financial ruin and didn't even get the joy of experiencing the finish line. Some go into their adventure with little or no money, relying on the kindness and generosity of strangers to provide all that they need. Others ask for money online through a number of different fundraising websites, such as "Go Fund Me." And, there are those who spend their savings -- or go into debt -- in order to attempt a crossing of the country on foot. My solo run across America had a price tag of around $7,000. I had to put in a large majority of that money, while some was donated by people who wanted to support the purpose of the run. I was never unemployed and matters regarding my business were dealt with timely and professionally.

Honestly, I would not quit my job in order to attempt an adventure. Of course, that's just me. A decent job in today's economy is something worth hanging on to, and I don't understand the perspective of those who are married and/or have children and choose to quit a job and let go of the security and benefits of that in order to reach for the horizon through countless miles. Throughout all of my running adventures (USA, Germany, Alaska, Mojave Desert), I operated my business. It was not uncommon for me to complete my miles for the day, sit in an ice bath, and answer business e-mails or provide direction to subcontractors over the phone. That's the part of my endeavors that people didn't see. To those who saw me on the road, I just looked like some guy who only possessed what was in the stroller I pushed. If they had only been able to see behind the initial appearance, they would have learned that I was juggling many different balls while running down the road -- athlete, father, business owner.

To all who quit their jobs in order to take on an "adventure" that they feel prompted to do, I wish you well. In today's ever-increasing competitive professional world, it is indeed a risk. Believe me, not all future employers will understand your exiting the job market in order to embark on a multi-month personal undertaking. Some will question whether you'll be content to work in a 9 to 5 environment, thinking that you might head for the door when the next adventure bug bites you. For me, I would not have taken on any of the adventures I did unless I was able to generate an income concurrently. I'm now 53 years of age and eventually retirement will come. When that day arrives, I'll go into it knowing that I generated an income steadily throughout my adult life -- which, I believe, will be a feeling of satisfaction equal to, if not greater than, crossing any of the finish lines of my adventures.