Is Keeping a Promise an Unrealistic Goal? 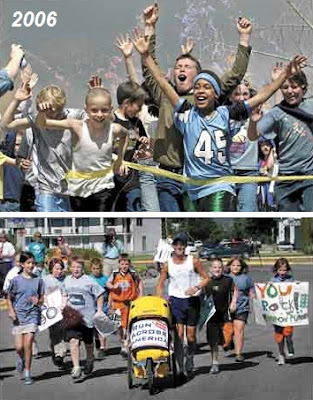 This month marks 12 years since I took that first step away from the Pacific Ocean to embark on a 108-day solo journey of 3,260 miles to the Atlantic Ocean -- simply to keep a promise I had made to a group of elementary students. The children shown in the photos accompanying this blog post met a challenge I posed to them of running 3,200 miles as a team during a single school year. I had promised that if they could do it, I would run their virtual coast-to-coast route across the U.S. for real, which I did. Those children are now around the age of 23 and are striding through life on various paths that they've chosen. I do hope that they remember their 2006 running and walking accomplishment, since they became the first recorded students in the United States to virtually run/walk coast to coast within one 9-month school year -- each participating child logging the equivalent of 3 marathons. I am still inspired every time I think about what they achieved!

Yes, I ran 3,260 miles all alone across America through the second hottest summer ever recorded just to keep a promise. Many thought I was nuts for doing so. However, it meant a lot to me to do all that I could to keep my word to those children, to try and show them promise keeping and integrity in action, and to let them know that their running/walking efforts were not in vain.

A few years ago, Psychology Today magazine published an article titled Why We Can't Keep Our Promises. The article states, "There are a number of commonly understood reasons promises are broken, including that our feelings, capacity, or circumstances have changed over time. The fading of romantic love for one’s partner is emblematic of this -- what once was is no more. The death of a loved one, the loss of a job, the birth of a child, falling in love, and developing illness, to list but a few, are all events that can shift our feelings and consequent behavior -- often monumentally. We may no longer have the capability or willingness to keep a specific promise, or it may no longer benefit those concerned to do so."

The article goes on to say,

"Should We Ever Promise? Trying as best one can to keep promises is crucial. These interpersonal contracts facilitate trust and love. But since so much is out of our awareness, are we all doomed to keep making promises we cannot keep? Well, yes. People will always struggle against themselves. We disregard human complexity when we harshly criticize others -- and ourselves -- for "failing" to feel and behave exactly as promised. But we can make a concerted effort to know ourselves better, to attend to that which we might prefer to ignore. Then, when we make a promise, we can be alert to the possibility of having contradictory feelings."

I know, that probably sounds like a bunch of psychological mumbo jumbo. However, the article is accurate in that sometimes people make promises that they are not able to keep -- either due to a change in circumstances, a change in feelings, a change in awareness, or due to situations beyond control. There were many things that could have happened during the 3,260 mileposts I reached for across America that could have prevented my finishing that endeavor. Fortunately, I was able to keep my promise... although it required absolutely every ounce of strength and perseverance I had. To me, it was worth it and I hope the students who put me on the road during the summer of 2006 will always remember our efforts that year.