One Result of Running Across America is Seen in Leg Transformation 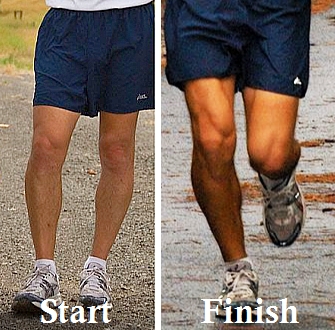 What happens to your legs when you run 3,260 miles across the United States alone? The photos accompanying this writing show what happened to my legs in 2006. Essentially, running 30+ miles per day for 108 days while pushing a jogging stroller weighing at least 70 pounds makes your legs incredibly muscular, cut and strong.

In 2016, a British runner -- Rob Young -- was in the middle of a run across America (with a support crew) when he stopped after claiming an injury, and after receiving a bashing online from people who accused him of cheating. As it turns out, his chief sponsor commissioned two experts and conducted a three-month investigation. The conclusion was that Mr. Young could not have possibly been completing the number of miles he was claiming each day. The 100-page report stated, in part: "We have identified no alternative plausible explanation for the data-of-record other than assistance, most likely in the form of riding in or on a vehicle for large parts of the attempt." Even before the report was released I was skeptical when I looked at pictures of him on the road... and what his legs looked like. Essentially, his legs looked the same in the middle of the run as they did at the beginning, with hardly any tan (it was a summer run) and no increasing muscle tone. That one fact immediately made me skeptical.

The first couple of weeks are the most difficult, as the body adapts to the routine hour-after-hour, day-after-day pounding. Then, it starts to get a little easier. The farther I went, the stronger my legs got. Regardless of the incline of the road, my legs tolerated the pounding well. By the time I reached the Appalachian mountains in the east, my legs seemed like two pieces of steel and I had never felt stronger. I took over 6 million strides across the country and although I did experience muscle soreness at times, overall my legs were like two pistons in an engine... going up and down for 108 days and bringing me to the pinnacle of my running career.