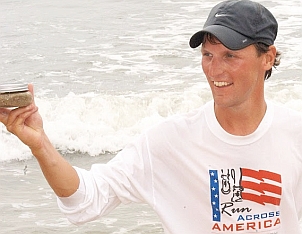 The guest bathroom of my home has a beach theme. On a small shelf in that room sits two bottles of sand... the sand that I collected from the Pacific and Atlantic Oceans during my 2006 solo run across America. I'm sure that most people who use that bathroom just glance at the sand and think that it's a cute touch to a beach-theme bathroom. Most don't know how much blood, sweat, tears, sacrifice and prayers went into obtaining those two small glass bottles of sand.

There is actually only a couple of inches of sand in each bottle. I had more, but many years ago I gave some of that sand away to one person whom I believe deserves to have it. You see, my daughter Ashlin is the one who triggered the entire run across America in 2006. Those of you who have followed the story already know that. She was there during the planning; she was there at the start; and, she was there at the finish. She and her fifth grade class encouraged me and literally put me on the starting line of that 3,260-mile endeavor -- one that would last for 108 days. Ashlin turned 12 years old one week before I finished that coast-to-coast journey. Today, Ashlin is 24 years old and engaged to be married.

On her 17th birthday I gave Ashlin a shadowbox (shown below). I wrote a poem to her and surrounded it with a few photos of the two of us. I also included a mixture of sand in the base -- which I had collected from the Pacific and Atlantic Oceans at the start and finish of my Oregon to Delaware run. It was made with love and gratitude for all that she contributed to that incredible endeavor, and for being a daughter that made me so proud each day for her choices, her work ethic, and her heart. A portion of the poem I wrote to her includes the following lines... and they are as true today as they were then -- and always will be.


"The sands of time will continue on, like an endless melody in a favorite song. And no matter how many grains of time that pass, always know that my love will last. It will endure anything that comes our way, and is unconditional and committed to stay. I ran across America with you in my heart, and in each step you were truly a part. The sand in this frame is from the start and end, a mixture of grains like two hearts as they blend. Each grain like a step that is taken in time, two lives as they look for their rhythm and rhyme." 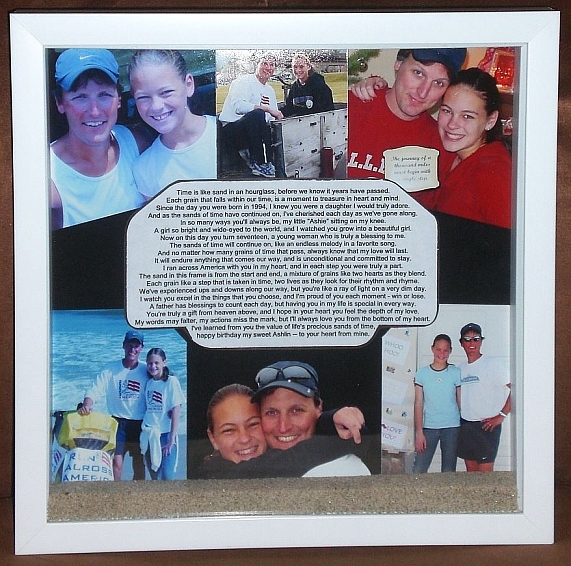