Becoming Catholic -- My Journey Into The Catholic Church 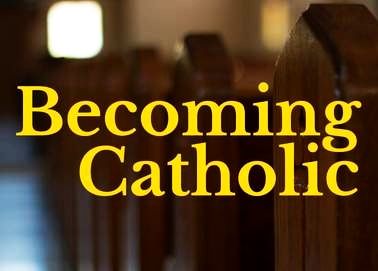 In five months, I'll be turning 55 years of age. One week after that -- at Easter -- I'll take the final step of a journey I formally began a couple of months ago, but which I've actually been on for many years... a journey toward becoming Catholic. In September 2019, I started the process of Rite of Christian Initiation of Adults (RCIA). It is a weekly class that I attend through the Catholic Church where I learn the teachings of the church in a more formal way, can ask questions to gain deeper understanding, and discern that I am ready to commit to living according to the Catholic Church's beliefs.

I am considered a "Candidate" since I was baptized into another Christian tradition (the Baptist Church at the age of 12). At the Easter Vigil Mass in April 2020, I will enter the Catholic Church through a profession of faith and reception of Confirmation and the Eucharist. This news may come as a bit of a surprise to some of my friends and family reading this, but I have been attending, and volunteering in, the Catholic Church for over four years and my wife has been a Catholic all of her life (a "cradle Catholic"). In fact, we were married in the Catholic Church.

There are certainly some differences in the beliefs of Baptists and Catholics, but I am studying everything closely to gain as deep of an understanding as possible. As some of you know, 30 years ago I obtained a Bachelor's degree in Religion, but now my studies are far more personal and I am on a path which I pray will bring me closer to God in my spiritual walk, closer to my wife in our marriage, and closer to fellow Christians as a believer.

Tens of thousands of people in United States became Catholic at 2019 Easter Vigil Masses. The Diocese that I am in had 93 Candidates enter the Catholic Church earlier this year. The Roman Catholic Church has certainly experienced well-publicized scandals and heartbreaking sinful choices by some of those holding a responsibility to care for, nurture, and lead Catholic parishioners. Turmoil has shaken the church, drawn criticism, and has rattled some Catholics’ faith in the institution -- bringing some Catholics to the point of ceasing to attend Mass. You may be wondering why I would be in the process of preparing to enter the Catholic Church in light of all of this. Keep in mind that the scandals of the Catholic Church are not found only within that institution, as I've written about before in this blog.

I recently read a blog post by a Baptist man who is in the same process I am... of going through the RCIA class to examine the Catholic faith on a path toward entering the Catholic Church. In light of all of the scandal, turmoil and criticisms -- of which he is well aware of -- he wrote: "The history, the global connectedness, the continuity, the tradition, the liturgy, the sacraments, the prayers, the saints, the mysticism, the focus on the poor, the emphasis on justice — all of these dimensions of the faith remain true, good, beautiful and compelling." I agree with that perspective.

Imagine if firemen refused to go into burning buildings to save others and just stood on the sidelines and watched the flames get higher. Sometimes, you have to go in when things are a hot mess. In other words, you have to have faith.