"Goodbye, Farewell and Amen" -- Words That Are Occasionally Needed 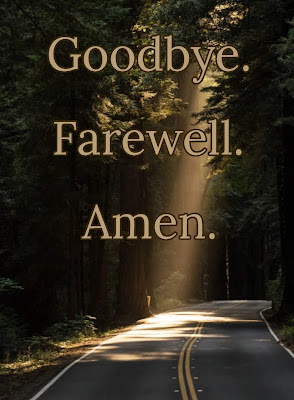 One of the television programs that I watched in the 1970's as a teenager was M*A*S*H, which focused on the lives of an army surgical team during the Korean War (1950-1953). The series ran for eleven seasons and ended during my senior year in high school in 1983. The final episode was titled "Goodbye, Farewell and Amen."

I've shared before in this blog that I was raised the youngest of seven children. Today, all seven of us range in age from 55 to 65. Sadly, several of my brothers and sisters have chosen to cut all ties with their parents and other siblings. The first such disconnect occurred when I was only about 10 years of age. A few years later, I would experience the same type of disconnect again when another sibling did the same thing. It has been over 40 years since I've had any connection with either of them -- not by my choice, but theirs. Before you start to think that perhaps they were running from some harmful or hurtful situation within our family, let me put those thoughts to rest. My parents were absolutely wonderful and provided my siblings and I with a fantastic upbringing filled with love, experiences and opportunities.

In the 1970's, two of my siblings chose to selfishly blaze paths in life completely apart from their parents and siblings and clearly did not give any thought or consideration to the trauma that would be caused in the wake of their departure. Being at the ages of 10 and 14 when this first occurred in my life due to the wrongful choices of my eldest brother and sister, I had to learn to cope with the loss to the best of my ability. No, I didn't receive counseling and I didn't pour out my heart to my parents, siblings or friends. Instead, I had to simply deal with the fact that some people will act selfishly and recklessly in life, abandoning others without any notice -- even siblings.

Ultimately, in my heart I had to learn to simply say the words "Goodbye, Farewell and Amen."

Unfortunately, this scenario would play out again later in my life with others very close to me. As a son, sibling and father it has been beyond challenging to deal with each loss. Yes, it is a complete loss. Those who choose to completely abandon a family member for years and decades reach a point of being deceased in the hearts of those they turned away from -- even though they are actually still alive but unwilling to connect. In a way, it's a living death. I've experienced several such 'deaths' of people close to me, and unfortunately it first occurred 45 years ago. Also unfortunate is the fact that I've become quite adept at being able to cope with such a situation and to move on in life, saying "Goodbye, Farewell and Amen" in my heart as I choose to look forward and not backward.

Sure, I had years of trying to seek out those who had walked away. I believe that's a natural instinct in human beings, especially when it is a family member who has chosen to break all ties and pursue a life completely apart from either one, some or all of the other family members. However, my heart has had to learn when to let go -- for the benefit of myself and the benefit of those I love who are in my daily life.

Those family members that were by my side in years gone by who have since chosen to completely disconnect from me in every way, I can only say that I no longer know you... but as a Christian I love you and through the grace of God I have learned to live without you. I can only pray that someday you will feel even a fraction of the pain, disappointment and heartache that you have willingly instilled upon me and others through your selfish choices. Perhaps by personally experiencing a degree of such hurt you will learn to be less selfish and more loving.