Will The Original "Marathon Man" Please Stand Up... or... Sit Down. 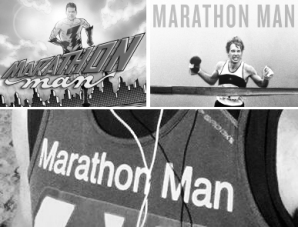 I first entered the world of running in 1976 at the age of 11, when the running boom was underway in America. In the 42 years since, I've heard the term "Marathon Man" applied to countless runners. Some marathon runners actually use the title "Marathon Man" when referring to themselves, such as Dean Karnazes, Trent Morrow, Bill Rogers and Rob Young. Although I've covered the marathon distance literally hundreds of times while running across states and countries, I've never actually called myself "Marathon Man."

During my 40 years as a runner, I never gave myself a title. In the early days I was a sprinter and hurdler, and then moved into the 5K and 10K distances, and eventually the 26.2-mile marathon distance... before jumping into ultra-marathon distances. I never felt the need to give myself a title, like "10K Guy" or "States Runner." I just put one foot in front of the other as "Paul Staso" -- which seemed right since that's the name my parents chose for me in 1965.

So, who is the original "Marathon Man?" Well, there is the 1976 movie titled "Marathon Man" which is a suspense-thriller directed by John Schlesinger. Actor Dustin Hoffman plays the role of a history Ph.D. candidate obsessed with running who gets placed unintentionally into a nightmare world of international conspiracy involving some stolen diamonds. He ends up being abducted by criminals and eventually escapes by running... thus the title, Marathon Man. Hoffman, a method actor by trade, got so prepared for the character he played that he lost 15 pounds after running up to four miles a day to get in shape for the role. Producer Robert Evans claimed that Hoffman would never come into a scene faking the heavy breathing required, and that he would simply run half a mile right before director Schlesinger yelled 'action' to make the scene more believable. However, I'm unable to find any record that actor Dustin Hoffman has ever actually completed the marathon distance. So, in the world of modern-day running he is not the original "Marathon Man."

Trent Marrow, age 45, owns marathonman.com and claims to have run more marathons than any other person on the planet across all 7 continents in one year and states that he has now run more than 300 marathons over the last 10 years. Could he be the original "Marathon Man?" There's also Dean Karnazes who has run across America as well as completed 50 marathons in 50 states in 50 consecutive days. Both of these guys refer to themselves as "Marathon Man."

The name Marathon comes from the legend of Pheidippides, the Greek messenger. The legend states that he was sent from the battlefield of Marathon to Athens to announce that the Persians had been defeated in the Battle of Marathon (in which he had just fought), which took place in 490 BC during the first Persian invasion of Greece. It is said that he ran the entire distance, a 'marathon' of 26 miles, without stopping and then burst into the assembly exclaiming "WE HAVE WON!" -- before collapsing and dying. I believe that Pheidippides will forever be the original "Marathon Man."