Christmas is one week from today! For the two children in my home (ages 10 and 13), it is indeed an exciting time -- and it's exciting for Kelley and I also! We're nearing the end of another year and I'm pleased to say that our family is in good shape. The girls are active in dance classes and we adults aim to take care of ourselves so that we can keep up with the energy and pace requirements of our jobs, maintaining our home, shuttling kids to practices and events, and all the rest that comes with a busy working/parenting schedule. Yet, with the holidays comes a little weight gain. Some statistics say that the average American gains 6 to 8 pounds during the holidays, but the more realistic figure is just a couple of pounds.

A couple of pounds doesn't sound like a big deal; however, studies suggest we don’t take it off -- ever! That means we enter each year a couple of pounds heavier, which can add up over the decades. And research suggests that if you enter the holiday season already overweight, it’s likely you’ll gain even more. I thought about making this blog post about ways of keeping the extra holiday pounds off (such as: staying active; limiting intake; getting enough sleep; and so on). As I thought about it, I decided that most people already know what they SHOULD do, but their failure to do what's needed is often simply a choice. 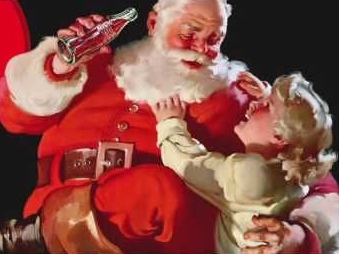 In my opinion, Jesus is the reason for the season. However, it is true that many people focus on the overweight figure of Santa Claus. Most American children can tell you what Santa looks like: "chubby and plump" with "a round little belly" that shakes when he laughs "like a bowl full of jelly." That’s Santa as described by Clement C. Moore, author of the classic poem "A Visit from St. Nicholas" -- also known as "The Night Before Christmas." Moore’s 1822 poem helped to shape Santa. The Coca-Cola Company has also played a role in shaping Santa. Since the 1920's, it has used portraits of Santa in its advertising -- the most famous images drawn by a Michigan illustrator who used Moore’s poem as inspiration. Coca-Cola seemed to change Santa from pleasingly plump to dangerously obese.

Based on flight profile data gathered from over 50 years of North American Aerospace Defense Command's (NORAD of U.S./Canada) radar and satellite tracking, NORAD concludes that Santa probably stands about 5 feet 7 inches tall and weighs approximately 260 pounds (before cookies). That would mean that he has a body mass index of 41, and anything over 40 is considered "morbidly obese." 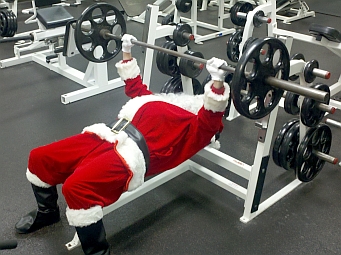 Prior to the 19th century, Santa was quite fit, as he still is in other countries even today. At a display of global Santa figures in Pittsburgh, Pennsylvania, called "Spirits of Giving From Around the World" (an exhibit of life-size Santas and original paintings), only the American Santa is obese; the weight of Santa figures in other countries is nicely proportional with height, and some can even be called athletic. In many countries, Santa doesn’t make reindeer haul him around, but rides a horse or walks from house to house. These depictions are more in keeping with the real St. Nicholas, the fourth-century bishop who was the inspiration for the modern Santa Claus and whose remains were analyzed in 1957. The examination revealed a man of average height (nearly 5 feet, 6 inches) and slender-to-average build, with a waist of about 34 inches. His teeth indicated a diet that was mostly vegetarian. Clearly, he was not a man who was chubby and plump with a belly that shaked like a bowl full of jelly when he laughed. And, it would seem he preferred a salad over cookies.

The name "Santa Claus" is the English form of the Dutch name for St. Nicholas -- Sinterklaas. The historical St. Nicholas was a godly man known for his charity and generosity. According to the best estimates, Nicholas was born around 280 AD in Patara (a harbor city in modern day Turkey). He later became bishop of Myra in modern-day Turkey. Nicholas died about 343 AD on or near December 6.

Enjoy the goodies of the holiday... in moderation. Get rest, get steps in, and if your belly starts to look like a bowl full of jelly, you may want to consider ringing in the new year with a gym membership!