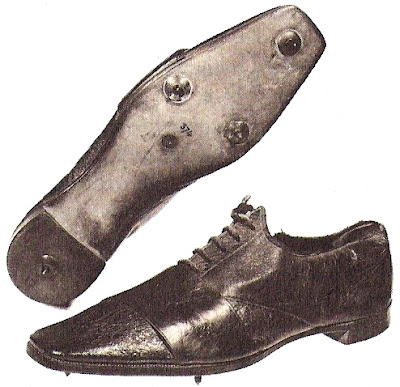 One of the earliest examples of running shoes is at the Northampton Museum in England. The shoes look like someone hammered nails through a pair of Oxfords. It's believed that the leather shoe was likely used for cross-country running. It represents the earliest spiked running shoe made on a production basis. Northampton was the center of the British shoemaking industry.

The design bears a definite relationship to early cricket shoes. The low cut design is of all leather construction. There are three spikes under the forefoot and one under the heel -- which suggests that the shoe was used as a distance running or cross-country shoe for dirt/grass surfaces. It incorporates a broad toe band, which is a separate piece of leather, sewn into the welt of the shoe to add lateral stability. 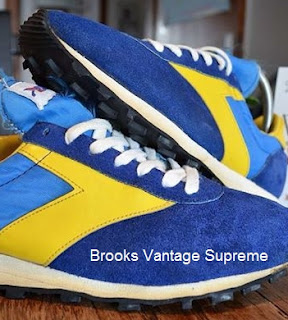 I started running in 1976. It wasn't until 1980 when I would begin running long distances as a member of my high school varsity cross country team. Wow, that was 38 years ago! I remember well my first pair of running shoes -- the Brooks Vantage Supreme. They were two shades of blue, with a yellow color added, and received a 5-star rating from Runner's World magazine. Those shoes carried me to the 1980 Alaska Region IV Cross Country Championships -- the year when my best 3.1-mile time was 16 minutes, 45 seconds (or a 5:35 average mile pace). That time would have given me 12th place overall at the 2018 Alaska State Cross Country Championships.

I wonder how fast I could have run in the 1865 Northampton shoes!