Rickey, Ali and Piotr -- Runners Who Embarked On Unique Endeavors 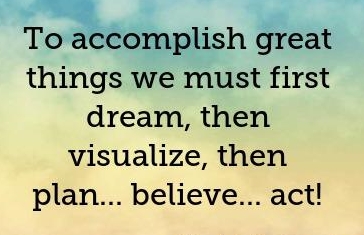 Last year, Rickey Gates decided to run every street in San Francisco. That's right, he aimed to run all 1,303 miles of San Francisco's streets in 46 days -- and he did just that. Last year, Ali Butler Glenesk set out to run 262 miles across California by logging a marathon per day for ten days. Unfortunately, just 87 miles short of her goal her body couldn't go another step, so she went home. Earlier this year, Polish runner Piotr Łobodziński sprinted up the 1,576 stairs of the Empire State Building in 10 minutes and 5 seconds. Although he now holds the second fastest time for the ascent of that building, he missed his overall goal by 5 seconds -- which was to do it in less than 10 minutes.

You've likely never heard of Rickey, Ali and Piotr before, but all of them set out to do unusual and challenging undertakings. Not all succeeded, but all toed the starting line and set off on their adventures -- which is more than most dreamers ever do.

I think it's important to have dreams... to visualize... to plan... to believe... and to act on dreams. I've tried to do that in my life and many times my dreams have become reality. This is the time of year when many school graduations are occurring. Young people are being encouraged to chase after their dreams. I first started setting goals in the 5th grade, when I made it my goal to run on the 6th grade track team as a sprinter in 1976. I achieved that goal and ever since then I've been goal setting and dreaming. Throughout my life I've felt that I'll always regret not trying far more than trying.

Scientists out of Cornell and the New School for Social Research decided to explore what people end up regretting. To accomplish this, they recruited hundreds of participants to share their regrets. Then, they divided the answers into two categories:

Other scientists have looked at the same question from slightly different angles. A Kellogg School of Management professor conducted a similar study a few years ago and found that people regret things they didn't do far more than things they tried but failed at.

Have a dream? Chase after it. If you're meant to achieve it, you will. If not, then you'll never look back later in life and wonder if it could have become a reality.