Today I'm sharing a short 15-second video from July 19, 2006 when I was running into Missoula, Montana during my solo run across America. I had run 652 miles by this point (in 3 1/2 weeks) with my 75-pound support stroller and was crossing the first intersection approaching Missoula from the west. This video has never before been shared publicly. I actually just found it on my computer's hard drive and recall well that hot summer day! Click on the video below to play it.

Here's what I wrote in my journal at the end of that particular day in July 2006:


It's not every day that you get to experience one of those moments in life that you know you'll remember forever. Today was one such day for me. I left Lolo, Montana at around 8:00 a.m. to begin running the distance to Missoula (my hometown). Although I've lived in Missoula for 23 years, I thought that Lolo was 10 miles away. However, it's only 8 miles. So, I took off too early and was approaching Missoula long before I was due to arrive at 10:00 a.m. for the "welcome" that was planned. To stall, I decided to stop and call family to talk about the feelings I was having about arriving in my hometown after 652 miles of running over the past 3½ weeks. This lasted about 20 minutes and then I was back on the road. The sun was shining and the morning was warming up quickly, eventually reaching 95 degrees in the afternoon -- long after I was done with my easy morning run. 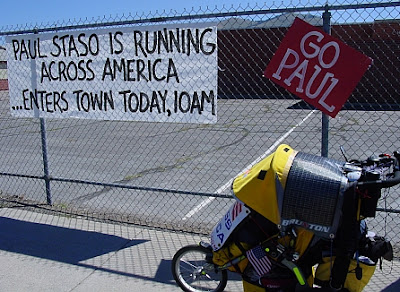 As I approached the edge of Missoula a local television car (KPAX TV) approached and Mr. Ian Marquand introduced himself. He began getting some footage as I ran down the road. I had no idea what was planned for my arrival in Missoula and as I reached the first street light I could see friends on the corner and a policeman on a motorcycle who would escort me into town. I stopped and greeted those who had come to encourage me and saw that there was more media there. I followed the policeman for about 3/4 of a mile, seeing friends along the roadway, and upon reaching McDonald Street I saw a wonderful sight! There were several Russell Elementary students on the corner waving signs of welcome and cheering for me. I was truly touched by their support and stopped to talk with them for a few minutes. Then, the escort took the lead and the kids ran with me down McDonald Street to Russell Elementary School where more people, signs and cheering waited for me. There were signs of encouragement along the way, including two wonderful large signs that had been prepared with pictures of me -- one at Cannon Beach, Oregon and one taken on the road Idaho. 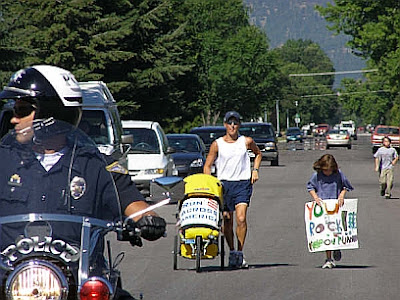 Once I arrived at the school I met several friends and school staff, and took some time to show the kids the details about "BOB"... my three-wheel running companion. I did a couple of television news interviews and talked with a reporter from the local newspaper. It was so nice to be able to see some of the kids that participated in the Run/Walk Across America curriculum. Today was not just about a guy who had completed 652 miles of a 3,200-mile journey. It was also about the kids that put me onto America's highways. Their effort made me lace up my running shoes, put my business on hold, and take off across this amazing country we call "The Land of the Free." I was reminded of just how "free" we are in America when a foreigner approached me several days ago and said, "Only in America could somebody do this." I am indeed fortunate to have this opportunity, and I'm not taking it for granted.

I now have a couple of days off to reflect on the amazing journey I've had so far, and what lies ahead. I will depart from Russell Elementary School in Missoula on Saturday, July 22, at 6:30 a.m. for a 32-mile day. Next Tuesday I will be in Helena, Montana (our state's capital city) and am slated to meet the Lieutenant Governor and Governor on the steps of the Capitol Building at 4:00 p.m. That will be an experience to remember! I'll make certain that "BOB" is looking his best. 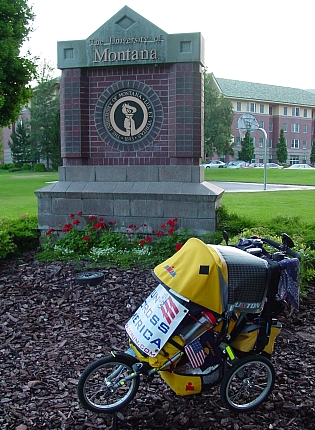 I truly want to thank each and every person who made my entry into Missoula today such a wonderful experience. I will always cherish the memory I have of the smiling, cheering faces of those children... holding up handmade signs and encouraging me. In many ways, my run is their run also. They are in my heart with each step and I hope that my effort is making a bit of an impact in their lives.

The only thing that would have made today even better would have been for my family to be in Missoula. They are still in California.

Wow, what a day! I'm going to sleep in my own bed tonight and am glad to be here feeling strong and ready to head into the remaining 2,548 miles of this odyssey. The current 30-mile-per-day pace has me set to arrive on Delaware's coast by mid-October. That would equate to almost 4 months of running. The heat is being persistent and Montana is due to see temperatures climb to the 100 degree mark next week. Currently, this area is in the mid-90s during the day and the fire season is truly getting underway. There are a few forest fires in Montana that are currently being fought and I'm hoping that I won't encounter too much smoke as I cross 610-mile-wide Montana over the next 2½ weeks.

As always, thanks for checking in and please be looking for new pictures to be posted. I'll be working on those over the next couple of days during my brief time in Missoula. So long from this hometown milepost!