I Spent Several Nights All Alone in World-Class Stargazing Territory 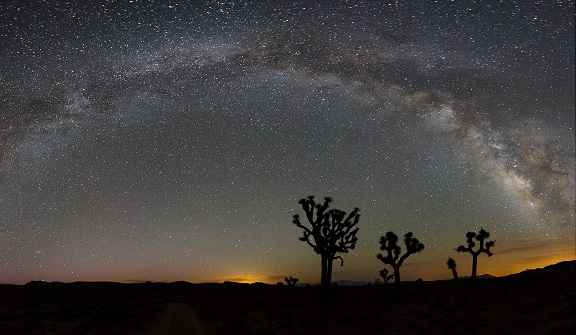 Have you ever laid on your back during a clear evening and looked up at a sea of stars in the sky? It is an absolutely wonderful experience, but particularly if you are in an area where there is no artificial light. The most amazing stars I've ever seen were when I was alone in the middle of the Mojave Desert in 2011. I ran 500 miles across that desert self supported, and spent several nights in a tent.

One evening, I had finished a 40-mile day of running and found a place to pitch my tent off of Lanfair Road in the Mojave National Preserve. I unzipped the top of my one-man tent to reveal a sea of stars that were unparalleled to any night sky I had seen before. I laid there in absolute darkness and silence and observed the stars' brilliance -- many shooting across the sky -- as well as satellites orbiting the earth. Other planets could also be seen. At the time I was in the Mojave Desert during April 2011, Saturn was perfectly visible (891 million miles away) and Venus was fairly good for viewing -- even though it's a mere 32 million miles away.

The Mojave National Preserve Conservancy calls the area I was in one of the darkest locations in the lower 48 states. Once there, you're not only far from big cities and spread out suburbs, but also small towns. Barstow, California is some 100 miles to the west and Needles is about 50 miles to the east. The International Dark Sky Association (IDA) has said that Death Valley -- located in the northern part of the Mojave Desert -- has stargazing that is world-class. According to the IDA, the skies there are affected by only the smallest amounts of light pollution. Astronomical objects seen there are available only to some of the darkest locations across the globe. The location is distant enough from the large cities of the Southwest so that much of the night sky is near pristine and offers views that are close to what could be seen before the rise of cities.

Based on my experience of viewing the night sky in the Mojave Desert, I can tell you that it made me more aware of light pollution and air pollution... something that most of us have become accustomed to in our day-to-day lives. The experience was also rather spiritual for me. To lay there all alone staring at the heavens above makes one feel very small in the universe. I spent some time in prayer and truly marveled at God's creation. I also recalled certain verses from Scripture, such as Isaiah 40:26 -- "Lift up your eyes and look to the heavens: Who created all these? He who brings out the starry host one by one and calls forth each of them by name. Because of his great power and mighty strength, not one of them is missing." And Daniel 12:3 -- "Those who are wise will shine like the brightness of the heavens, and those who lead many to righteousness, like the stars for ever and ever." And, of course, Psalm 19:1 -- "The heavens declare the glory of God; the skies proclaim the work of his hands."

For me, the evenings alone in the Mojave Desert looking up at a blanket of stars and constellations was a significant moment in my life. The thoughts I had, the prayers I said, the emotions stirred in me.. all of it had a profound and lasting impact. I wish that every person could have an opportunity to experience such a moment.