"Back To My Life" -- My Final Words After Running Across America 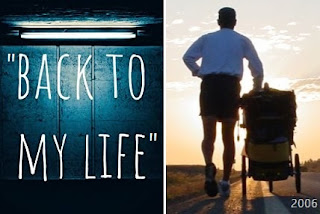 On October 20, 2006 I completed my 3,260-mile, 108-day, 15-state solo run across the United States. I had averaged 30 miles per day from the Oregon coast to the Delaware shore, being disconnected from the routine happenings in my life as a 41-year-old father of four children. After it was all over, I was contacted by a reporter for one last interview. In the article he described me as a "lithe, sinewy man" and shared a few details about my journey. At the end of the interview, he asked me what I would be doing next. I paused a moment, reflecting on the endeavor I had just completed. Then, I said four words which would become the final words of his article: "Back to my life."

During that June to October adventure, people had seen me as simply an ultra-endurance runner reaching for the horizon day after day in hopes of making it to the Atlantic Ocean. I was just an odd spectacle seen along the road by many people as they headed to work, dashed to the grocery store, or were on their way home from one of their kid's activities. Some believed I was homeless, a vagabond, or out of sorts... mentally. Many passed me by without a glance, some were annoyed at my presence along the road's edge, and a few attempted to run me into the ditch. Not many people understood what all of my strides were about. Often, I was portrayed as a guy who was paying his dues for losing a bet. If you're not sure what that means, you'll want to read some of these previous posts: Keeping A Promise -- What Does That Look Like In Action?; Make Good on a Promise? Preposterous!; and, Is Keeping a Promise an Unrealistic Goal?.

Regardless of public perception of me from June until October 2006, after I ran into the Atlantic Ocean to complete that coast-to-coast challenge I had to get back to my life. Most people who read the four closing words of that article had no idea what "back to my life" really meant for Paul Staso. I think that some people just thought I was a guy constantly in motion -- running here, there and everywhere for no apparent reason. In fact, at the time I was operating my own business and was the father of four children between the ages of 6 and 13. My marriage of 19 years had been struggling in many ways and I was attempting to cope with that while still trying to be the best father that I could to my children. Although not planned at the outset, my run across America ended up being rather therapeutic for me. I was on the road for nearly four months alone with plenty of time to think and process the events and choices of my life. I was also well aware of what the words "Back to my life" meant and what was awaiting me.

Upon my return, I quickly realized that going back to my life would not be quite the same 'life' as the one I departed from when I took those initial steps away from Cannon Beach, Oregon on June 23, 2006. There were some ways in which life had indeed changed, and not necessarily for the better. Within five years of that run across America my marriage was ending and my business was crumbling. Most of my children were teenagers and busy with their friends and activities. I diligently aimed to keep hidden the emotional struggles that I was going through -- struggles that had been mounting for decades. I tried to focus on being a fun Dad... a fair Dad... a Dad that was decent, supportive, giving, and who would draw a parental line in the sand when one of my children tried to push the boundaries of what was acceptable -- as most teenagers do. Unfortunately, even the most loving intentions can go unnoticed and unappreciated.

I look back on the words "back to my life" and the season of life that I was in 15 years ago and can honestly say that my life is completely new. I've written in this blog about that. I'm blessed to be in my third year of marriage to a wonderful, loving, faith-filled woman; I now reside in the state of Indiana; and, I'm fortunate to not only be a father but also a step-father. I no longer operate my own business, but am in my seventh year working for a respected law firm. It has been 10 years since my last adventure run (across the Mojave Desert) and in May 2017 I retired from ultra-endurance running. I'm no longer Baptist, but Catholic; I teach junior high Sunday School; and, I have my eyes set on e-publishing a devotional for Catholic athletes -- as well as other e-books about my adventure runs, to be made available through Amazon and other e-book outlets. Life is not only good... it's great!

Never again will I say the words "back to my life," because I never intend on stepping outside of my usual life routine again as I did so many years ago when I was reaching for mileposts along lonely roads. God has lead me right to where He wants me to be, and I'm grateful for that.

"For I know the plans I have for you," declares the Lord,

"plans to prosper you and not to harm you,

plans to give you hope and a future."