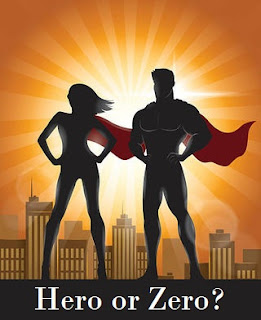 A "Hero" is defined as a person who is admired for courage, outstanding achievements, or noble qualities. In October 2006 -- after I had completed my solo run across the United States simply to keep a promise to a group of elementary students -- I had some people tell me that I was a hero. In fact, the world-renowned Mayo Clinic bestowed upon me the "Health Hero Award" for my 15-state coast-to-coast accomplishment. Honestly, I've never considered myself a "hero" for anything that I've done in my life. I've simply aimed to do the best that I can in each situation that I've been presented with. There are times when I've experienced great success, and times when I've fallen into significant failure. In the eyes of some, I'm sure there have been moments when they've viewed me as a hero, and times when they've viewed me as a zero. Is that difficult for me? Not really. That's simply called life.

My 56th birthday is coming up soon and as I look back on the past 20,000+ days on this earth I can recall times when I've viewed the actions and choices of others as being heroic... a fireman who saved a small child from a burning building; a kind soul who changed the life of a homeless person; and, a saint who was put to death as a result of staying true to his faith. There are heroes all around us -- people to admire for their character qualities and achievements. However, it is our Heavenly Father who is the Ultimate Hero! God gave us His son, Jesus Christ, to die on a cross for our sins -- saving mankind and creating a way for us to be with God forever. Unlike earthly heroes, God will never let us down. There are many places in Scripture where God says that He will never leave us or forsake us, and that He will be with us wherever we go. That cannot be said of earthly heroes, because they -- like us -- are sinful mortals.

I remember very well the first time a "hero" let me down. It was in 1979 when I was fourteen years of age. My eldest brother was ten years older than I and had been serving in the military for several years. When he would travel back to our home state to visit, I was always impressed with his appearance. He was much taller than I, looked distinguished in his military uniform, and had a smile that could brighten a room. He was a Christian, played guitar, and enjoyed running -- all things that would become a part of my own life. I truly looked up to him and in many ways he was my hero when I was in junior high. However, he made a choice that took away his 'hero' status in my life. For selfish reasons that only he truly understands, he chose to cut all ties with his family and move away with his new bride -- never to be seen or heard from again. Yes, it has been 42 years since my eldest brother disappeared from my life. I don't know if he's dead or alive... but after 42 years I live as though he died decades ago.

I went through stages -- disbelief; confusion; anger; sadness; letting go; and, eventually acceptance. It was truly a grieving process. The last time I saw him was when I was competing in an eight grade track meet. I had won all of my races and he came up to me on the infield of the track, congratulated me, and told me that I was a very good runner and that I should continue to develop my running abilities. I remember that he was rather serious as he told me that. Then, he said he would see me later. He turned and walked away across the infield. I would never see him again. It was that day when my brother went from being a hero in my life to being a zero in my life -- completely absent without even a goodbye. I've written before in this blog about other people in my life who have made similar choices. All that I can say in my heart is Goodbye, Farewell and Amen.

As I begin to enter the autumn season of life, I no longer have earthly heroes. Many times, "hero" status is fleeting and often leads to disappointment for those who look upon others as heroes. These days, I set my eyes and heart heavenward to Jesus Christ -- a hero to more than two billion people worldwide. The word "hero" comes from the Latin, heros, meaning, "defender, protector" and "to save, deliver, preserve, protect." Closely related to the word "hero" is "Savior" -- which comes from the Latin, salvatorem, meaning "one who delivers or rescues from peril" or "heals." Jesus is infinitely higher above all other heroes, and He is the only Hero and Savior that I need.