The Toll of the Presidential Election on Americans' Health 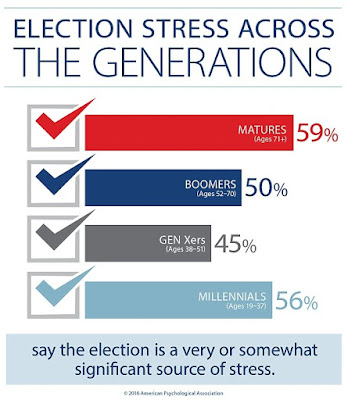 Today American citizens elect a new President. It has been a long, contentious couple of years of debates, town hall meetings, campaign advertisements, and more. It all comes down to this day! However, what has the toll of this election been on the health of Americans?

The American Psychological Association reports that 52 percent of U.S. adults say that the 2016 U.S. Presidential election process has been a very or somewhat significant source of stress.

Recent reports tell us our political culture is affecting our health and damaging our relationships. A national survey showed that roughly 60 percent of Americans are sick and tired of the election — and that was back in July!

In recent months, anger and divisiveness between political opponents intensified to a fever pitch. Therapists have been increasingly treating patients for election-related anxiety, and in October the American Psychological Association produced coping tips for the more than half of Americans who are suffering from election stress.

Though voters have remained interested in the election, they are tired of news about the nominees’ personal lives, back-and-forth comments, and ever-changing polls. A recent Gallup poll had the headline “Americans less sure they’ll vote for president.” The survey found that 69 percent of the nation are sure they will vote today, but this is down from 76 percent in 2012 and 80 percent in 2008.

This presidential election has certainly taken a toll on the health of the United States. Will the upcoming months and years see the nation become healthier? Time will tell.