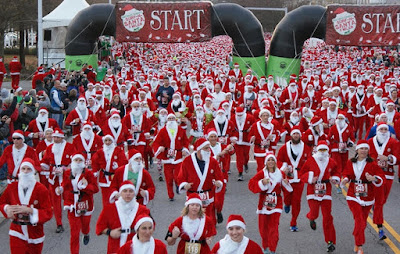 It was just one year ago that 5,025 road race participants dressed in Santa suits crossed the finish line at the Surf-N-Santa 5 Miler in Virginia Beach, Virginia. As a result, they broke the Guinness World Record for the Largest Santa Claus Run.

The most complicated Guinness requirement was that the participants had to be wearing all five pieces of the Santa suit provided to them for the duration of the race, including the red pants, a red jacket, hat, black belt, and a white beard. Guinness officials allowed runners to pull the beard down under their chin, if needed, so it wouldn’t restrict their breathing.

To help make the suits as comfortable as possible for runners, there was an alteration table set up during packet pickup the day before the race, as well as the day of the race.

Race officials were also required to take video of the start and the end of the race, and have counters at the finish line to see how many racers did not have their full five-piece suit on. The official counters tallied 191 Santas who did not have their full suit on at the finish, which left them with 5,025 official Santa finishers — enough to break the previous world record of 4,961 Santas set at the 2013 Dundalk Charity Santa Fun Run in Ireland.

The course went along the Virginia Beach Boardwalk, which was decorated with Christmas lights. Racers could even make pit stops at either a gingerbread cookie or a candy cane aid station for an energy boost throughout the race. Check out the 2016 highlight video below!