Children Age 8 and Younger are Increasing Mobile Device Use 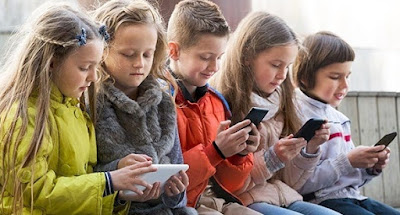 In 2013, children 8 years of age and younger spent about 15 minutes a day staring at a mobile screen, and now they spend 48 minutes a day! This information is according to a report by Common Sense Media, a nonprofit organization focused on the use of media and technology by children, parents, and educators. The report also found that 42% of children 8 years of age and younger now have their own tablet devices, a steep increase from 7% four years ago.

The report also shows that mobile devices are now as common in homes as televisions. Today, 98% of households with kids under 8 have a mobile device. Children age 8 and younger now spend an average of 2 hours and 19 minutes a day with screen media. Mobile viewing is taking over -- it now makes up 35% of screen time, compared to 4% in 2011. According to the report, nearly half of children age 8 and younger watch TV or play videogames in the hour before bedtime, and 42% of parents say the TV is on "always" or "most of the time" in the home. Overall, 67% of parents whose children use screen media say it helps their children's learning.

A growing trend among parents is to give young children their own hand-me-down smartphone or tablet, which may only connect to Wi-Fi for games, apps and educational purposes. In a recent study published in the journal Developmental Psychology, 3rd through 5th graders (ages 8-11) who had their own TV or video games in their bedrooms spent more time with media. More time spent was associated with a reduced amount of sleep and reading, and that has been tied to lower grades in school. In addition, those with bedroom media were likely to be exposed to more media violence and tended to act more aggressively than children with no bedroom media.