I Never Knew That My Laugh Is Like That of John Denver! 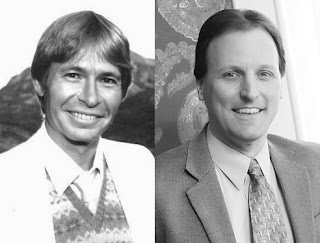 My last blog post was about ultra-runner Björn Suneson, of Sweden, who is currently running solo across America for the 6th time in 11 years. While I was speaking to him along the road he said, "You sound like John Denver, especially when you laugh." In fact, he said that a couple of times during our roadside encounter. In his blog he recalls it and writes, "Paul laughs even more and sounds even more like John Denver, one of the country singers I often listen to." Never in my life have I been compared to well-known country/folk singer and songwriter John Denver in any way. I found quite a bit of humor in it since the only comparison I see between John Denver and myself is guitar playing. 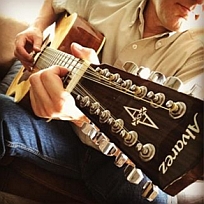 When I was 10 years of age, in 1975, my parents gave me a guitar. At that time, John Denver was soaring in popularity and was who I listened to the most. In fact, his music was the first that I learned to play on guitar. I never had guitar lessons, so I'm self taught. As a boy, I would sit in my bedroom and listen to the radio, trying to play along with songs using a sheet that had basic guitar chords printed on it. I literally learned the guitar by ear, listening to notes in songs and working at identifying which notes they were and then trying to recreate the sound on my guitar. In the 1970's I learned to play such John Denver songs as Rocky Mountain High, Annie's Song, and Sunshine on my Shoulders. It has been 43 years since I first began to learn how to play a guitar, and although I don't pick up my 6-string and 12-string guitars as much as I used to, I still enjoy playing John Denver's songs and consider his music the root of my guitar playing abilities.

So, it was nice to hear Björn say that my laugh reminds him of John Denver -- a man who recorded and released approximately 300 songs, about 200 of which he composed, with total sales of over 33 million records worldwide.

This year marks 20 years since John Denver died in a home-built airplane crash near Pacific Grove, California. He had been a long-time pilot with over 2,700 hours of experience. He died at the age of 53, the age that I am now. His legacy of promoting efforts to protect and preserve the wilderness and wildlife lives on, as does his wonderful music.

I never knew that my laugh is like that of John Denver... or at least it is in the eyes of a running Swede!