Björn Suneson is on His 6th Solo Run Across America 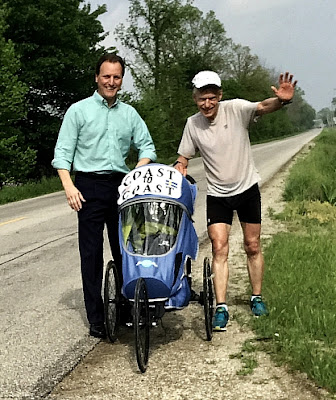 I first met Björn Suneson, of Sweden, in 2010 when he was running across America for the second time -- his first coast to coast run being in 2007. He has told me several times that he was inspired by my 2006 solo crossing of the country and set out in 2007 to do the same thing. Well, it's now 2018. Björn is 70 years old and on his 6th run across the United States! As I was driving to my fiance's house last night after working at the office, I passed him on a road that I actually ran on during my crossing in 2006. I turned around and we chatted for about 45 minutes.

The photo accompanying this writing was taken with a self timer on the hood of my car. The road stretching off to the east behind us leads to my fiance's house. Björn is running west, his first time going that direction on a crossing of the country. I can tell you that he is in extremely good shape for a 70-year-old man. His blog states that he averages nearly 80 miles of running each week when he's in Sweden. 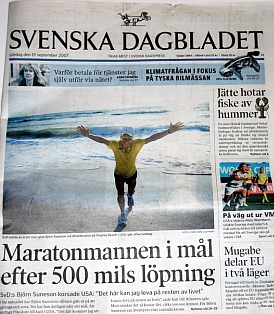 Björn is a former economics reporter for the Svenska Dagbladet, a daily newspaper in Stockholm, Sweden. Retired, he is married and has 5 adult children, and grandchildren. In the past 11 years he has run solo across America 5 times, and if he is successful this year he will have six crossings completed. That is more than anyone has ever done. He doesn't run for records, to promote any cause or charity, to raise money, or to gain publicity. Björn simply runs because he enjoys it and has a real fondness for America and the people who call this country home. He likes to meet as many people as he can and learn about the places he runs through. I think his running is pure and he certainly has endurance! Björn recently told The Daily Star in Oneonta, New York, "I'm drawn to running and I want to run for myself... I like to be alone."

Björn began his run across America this year by running in the Boston Marathon on April 16. What a way to begin a cross country run! He did well, placing fourth overall in his age division. He's aiming to complete this year's transcontinental run on the Oregon coast. For most of the miles he has run across the USA, he has been alone. However, there have been times when his brother has acted as a temporary "crew" with a vehicle, and that will happen this year when he is in Idaho and Oregon.

As we were chatting, he mentioned that he reads my blog regularly and stated that my 2006 run across America must have had a profound impact on me because even now, 12 years later, I'll still write about it. As I tried to explain to him, I don't have a book about my run across America, so I use this blog to occasionally write about the happenings during that run -- as well as my solo runs across Montana, Alaska, Germany, and the Mojave Desert. One year ago, I wrote about my reasons for writing this blog, and one is because I want my children to know the stories -- and they'll have them even after I'm gone someday. For all of Björn's crossings, his children were adults. However, my four children were between the ages of 6 and 13 when I ran across the country. I want them to know the stories, to know what I learned about myself and the country we call home, and to know about goal setting, persevering, and aiming to do your very best... even in the most difficult of circumstances. Yes, this blog is my "book" and some of the topics I address are so that my children (and someday their children) will know more about me.

As Björn and I were chatting, a train came rumbling past us on a track parallel to the roadway. Hearing each other was very difficult, so we stopped talking for a moment to let the train pass. As I stood there looking at him and his loaded jogging stroller, I glanced down the highway in the direction I had ran 12 years earlier. I looked down the road and knew that just 5 miles away was my fiancé waiting for me to arrive to have dinner with she and her two youngest daughters (ages 10 and 13). I had just gotten off of a full day's work at the office and unexpectedly... there I was, on the edge of a road chatting with a man doing something I had done over a decade earlier. As much as I admire Björn's determination to cross the country for a sixth time, there was absolutely nothing in me wishing that I could do it again. There are certainly some similarities between Björn and I, but there are also differences. I don't feel the need to run across America alone again. He is clearly motivated to do it repeatedly... six crossings in just eleven years. No, I don't "miss it." All of my adventure running across states and countries was to promote youth health and fitness, as well as to provide me with a means to persevere through a challenging time in my personal life. I accomplished what I wanted to, and I'm satisfied. Now, I enjoy many other aspects of life outside of endlessly putting one foot in front of the other. I am content, I am at peace, and I am happy.

To date, Björn has run approximately 16,500 miles across the United States during his numerous crossings, which have required a total of about 550 days -- or 1½ years! I wish Björn success in completing his attempt at a sixth crossing. Running coast-to-coast across America is a huge undertaking for anyone at any age. He is pounding out the miles and if you want to follow his progress, just go to www.suneson.se. You can click on a link at the upper right of any page in his blog to read the English version. Keep on running, Björn!