This Olympic Record Is The Oldest In Athletics! 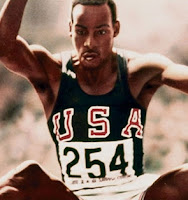 American Bob Beamon jumped into the history books during the 1968 Olympic Games in Mexico with the farthest long jump in Olympic history. He made a jump of 29 feet, 2 1/4 inches. He held the world record until 1991 when Mike Powell jumped two inches farther. However, Beamon's "Olympic" record still stands after 48 years! Beamon's record jump was named by Sports Illustrated magazine as one of the five greatest sports moments of the 20th century. For several years I've had his book on my shelf ("The Man Who Could Fly - The Bob Beamon Story"), but have yet to read it. I believe it's time to dust it off and give it a read! Watch Beamon's amazing leap...