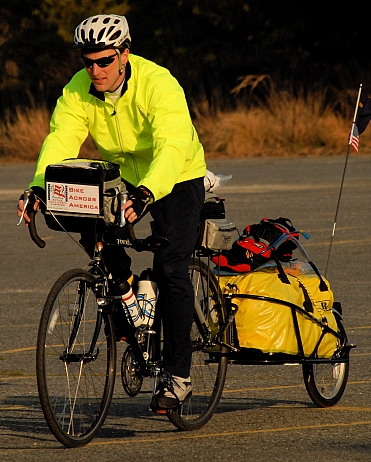 There have been some people who have contacted me over the years to ask what "P.A.C.E. Bike 2007" was all about. Essentially, after I completed my solo run across America on October 20, 2006 (known as "P.A.C.E. Run 2006") I began planning an east-to-west solo bicycling trek to take place during April and May 2007 to visit schools along the P.A.C.E. Run route and give presentations. Organizing all of the details of that cycling trek in a mere few months was quite an undertaking, not to mention the preparation on the heels of running across America. Since I've never considered myself a long-distance bicyclist, P.A.C.E. Bike 2007 was certainly going to be a challenge.

The idea was to average around 55 miles per day along the same route I had successfully run across the United States -- although I would be going the opposite direction. I had many school assemblies lined up to do along the way and the idea was to visit schools and try to encourage kids toward greater health and fitness, as well as setting personal goals. If I had been successful, I would have become the first person to ever run solo and bike solo across the United States within one year. Those who find remnants about my 2007 bike attempt online often wonder what happened with that project and why it was never completed. This blog entry is designed to explain that undertaking.

As most people know, since running across America solo ten years ago I have also run solo across Alaska, Germany, and the Mojave Desert. However, it is P.A.C.E. Bike 2007 that seems to raise questions now and then. 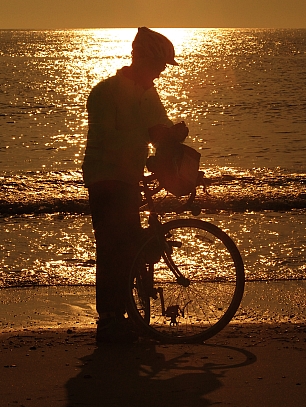 On April 11, 2007 I dipped the front wheel of a donated touring bicycle into the edge of the Atlantic Ocean at Cape Henlopen State Park (Lewes, Delaware) -- only 6 months after having run into that water to finish my run across America. The first day went absolutely wonderful. I rode comfortably for 72 miles from Lewes, Delaware to Grasonville, Maryland. However, only 50 miles later disaster would strike. I was in Washington, D.C. on Capitol Hill crossing a street with the right of way when an inattentive taxi driver struck me from the side. I hit his windshield and was then launched through the air when he locked on his brakes. The bike was badly damaged and could not be pedaled and I sustained cuts and bruises, although no broken bones. Emergency personnel were immediately on the scene and I was treated curbside by paramedics and then was free to go. A friend of mine in D.C. took me and the damaged bike to a bicycle shop to have the bike looked over. The prognosis was not good for a solid repair of the bike. 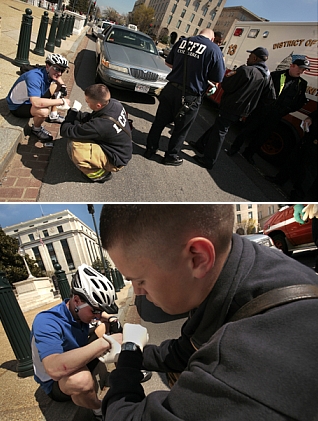 Tim Bamforth, who heads up the Seashore Striders running club in Lewes, offered to do what he could to help get me back onto the road. A bike shop in Lewes worked on the bike and got it usable. I returned to D.C. and was working on regaining my mental focus for the 3,100 miles that remained of this huge undertaking. Having just recently completed a 4-month journey across America on foot, I was still battling the lingering weariness of that enormous task. When I got back on the saddle in D.C., a Nor'easter storm hit. A Nor'easter is a kind of macro-scale storm along the East Coast of the United States... and the one in April 2007 was significant! I was unable to proceed on the bike due to the storm, which lasted several days. The combined effects of high winds, heavy rainfall, and high tides led to flooding, storm damages, power outages, and evacuations, and disrupted traffic and commerce. The storm caused at least 18 fatalities.

The National Weather Service reported 7 1/2 inches of rain in Central Park by midnight of April 15, the second heaviest rainfall in 24 hours on record, and indicated that this storm caused the worst flooding since Hurricane Floyd in 1999. Airline and rail transportation was disrupted and power failures affected several thousand people. On April 16 the storm caused sustained winds of nearly 100 mph, with gusts topping out at 156 mph. High winds during the storm prevented emergency medical services from using helicopters for evacuation of the injured at the Virginia Tech massacre -- which happened at this time and was somewhat close to my location. During that tragedy, 32 people were killed by a gunman, and many others injured. 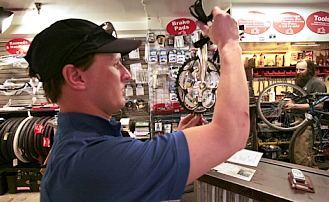 To top it off, I was in the heart of the storm on the outskirts of Washington, D.C. and had a flat tire. While trying to fix the flat in high winds and torrential rains, two guys tried to rob me. I attempted to call for help on my cell phone, but the rain was so intense that my phone filled with water in a matter of minutes and was then unusable. I was eventually able to get assistance and thankfully the two men did not get away with anything and did not injure me. I was taken to the home of the Poppleton family, who had assisted me with some navigation into D.C. during my run across America. It was at their home where I analyzed the situation closely. Mentally, I knew what was required to successfully cross the continent alone (whether by running or bicycling) and after having been hit by a taxi; riding a repaired but not optimal bike; put into one of the worst Nor'easter storms; nearly being robbed; and hearing the grieving of so many people over the Virginia Tech massacre, I knew I was not in the right frame of mind to continue. Therefore, I abandoned P.A.C.E. Bike 2007.

Active.com was reporting updates about P.A.C.E. Bike 2007 as it was happening. Here's the final report that Active.com made:


Last week, Paul Staso canceled his transcontinental-campaign, P.A.C.E. Bike 2007, due to a series of unfortunate events. Less than one week after returning home, Staso has vowed to continue promoting youth fitness in America. Staso’s real life struggle during his attempt to cycle across the country has created a more endearing persona. Instead of Staso being viewed as an athlete that is capable of the extraordinary, he now has more human-like characteristics associated with him. This new platform will allow Staso to reach a greater audience of children who have experienced a similar struggle with setting and reaching goals. Our thoughts and support are with Staso as he continues Promoting Active Children Everywhere. 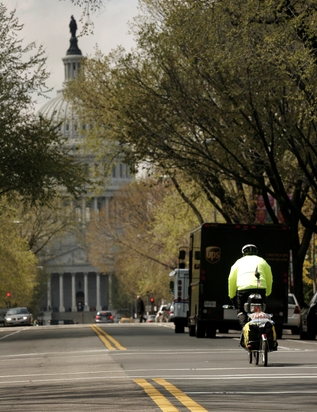 Although P.A.C.E. Bike 2007 was not meant to be, my purpose through P.A.C.E. of Promoting Active Children Everywhere has continued over the years. I took a lot of criticism from some people for cancelling that bicycling trek. Some thought that I was being a "wimp" and that I just needed to get back on the saddle. However, after having run successfully solo across the country I knew what was ahead of me and what state of mind I needed to be in to accomplish the task. In short, continuing would have been far too risky due to the lack of mental focus I was experiencing. As a father of four children, I wasn't willing to risk disaster. As a result, I returned home after completing only about 135 miles of the 3,260-mile route.

So, that's the story of P.A.C.E. Bike 2007. You may think to yourself, 'I would have continued'. However, you were not in my shoes. Until you have your children to consider... until you run solo across America... until you're facing the challenge of crossing a continent again only months after having already done it... until you've dealt with a bike collision with a vehicle, a raging storm, a near robbery, and the emotions of a massacre of students... until you've sat alone with all of that on your mind and heart and considered the long road before you... it is not possible for you to understand the position I was in and the seriousness of the decision I made in April 2007 to cancel the bike trek. 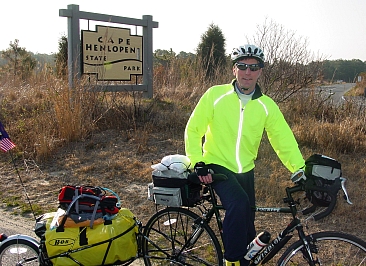 To this day, I know I made the right decision. Regardless of what others may believe I should or shouldn't have done, I have accomplished some worthwhile athletic adventures over the years.

P.A.C.E. Bike 2007 was a moment in time which actually enhanced my perspective of endurance challenges and sharpened my resolve to always do my best, but not to sacrifice my life on a bike seat or in running shoes. I will never do a P.A.C.E. journey unless I am completely in the game... mentally and physically. In April 2007, I was still physically in the game -- although nursing cuts and bruises from the taxi collision -- but was not mentally where I needed to be to continue. Fortunately, my prior endurance experience gave me the wisdom to make the right decision to cancel the transcontinental bicycle trek.

Always pursue your goals and dreams, but always be wise when making decisions along the way.