A Very Honest Blog Post About My Running Life... 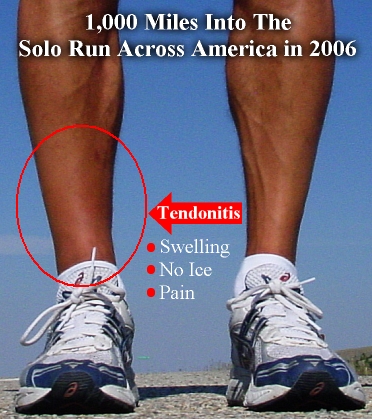 This is going to be the first in a series of writings about my running... what it has done to me and where I should go from this point forward.

In all honesty, I'm unsettled when it comes to my current level of fitness, my running, and future goals in a sport I've done for 42 years. I've run thousands of miles across states and countries to be a visual example of the importance of setting goals, taking care of your body, and persevering when adversity arises. Over the past 3 years I've actually done very little running -- especially in comparison to years and decades prior. Life changes and priorities can also change. I simply don't have the time to train endlessly to run across states and countries like I have in the past. There was so much energy and emotion poured into each adventure run I did. All of them took absolutely everything I had to give. I would run all day... speak at schools... talk to sports teams... visit with host families... pour over logistics for the next day... and much more as I ran from one border to another. I'm older now, and my body is aging.

At 52 years of age, I'm now seeing some of the results of my extreme ultra-endurance lifestyle. I notice most change in my lower right leg -- which is the leg that has sustained the majority of tendonitis I have experienced at times while logging mega-mileages. I believe there has been some blood vessel damage, blood flow restriction, and now there is some discoloration in spots. You can see an example of the swelling in the picture accompanying this post. I experienced tendonitis many times, and usually it was the right lower leg. As you can see in this picture, the swelling is quite noticeable when you compare my right leg to my left. The veins in my lower right leg (in the photo) are not visible due to the restriction caused by the swelling. I would continue to run on, 30 to 40 miles a day, with such swelling... and often no ice to treat the tendonitis. As I've reached for endless mileposts, I never wore compression socks --  like many ultra-runners do now to reduce swelling and promote blood flow. Those socks were not as popular with endurance athletes back when I was pounding out miles across states and countries. I've recently purchased some athlete compression sleeves for my lower legs and will be wearing those more often to see if I gain any benefit. Perhaps I can do some repair work on my lower extremities.

My legs took an extreme beating all throughout my 40's. Many times, like in the Mojave Desert, I wasn't able to properly repair my body at the end of each day. Micro muscle tears accumulated and deep tissue damage happened on each run because I was solo and often didn't have access to ice to combat muscle swelling and damage. My training miles were significant and the journey runs I did pushing an 80-pound stroller were definitely extreme. Pushing off of my feet while pushing over half of my body weight in front of me put incredible strain on my calf muscles (not to mention my shoulders and back -- and in 2011 I suffered two herniated disks as a result of my successful solo run across the Mojave Desert). If I could go back and change one thing, it would be to train less. Running across a state or country is more of a mental challenge than a physical one. Yes, you do get blisters and sore muscles, but it is the mental component that is the most difficult -- especially when you don't have a support crew. Back in November 2016 I announced on this blog that I was retiring from running across states and countries. I am engaged and will be getting married, and my fiancé is a wonderful woman and I don't want to be apart from her as I'm reaching for countless mileposts during weeks or months at a time. She and I also talked about the danger factor of what it takes to do such extreme ultra runs, although I am a pretty defensive runner and often feel safer on the edge of a road with a stroller than I do in a car.

Earlier this year I thought about returning to the track lanes to see if I could hurdle competitively again. I can still hurdle... finding that even at 52 years of age I can clear an Olympic height of 42 inches with decent form. However, as I've been working on trying to regain the flexibility and speed necessary for hurdling ten 36-inch barriers (which is the height for my age group), I've come to the conclusion that my body is simply programmed for endurance. That is all that it has known for 33 consecutive years. My fast-twitch muscle fibers are nowhere near as abundant as my slow-twitch fibers. My body functions far more optimally in an aerobic state than it does in an anaerobic state. I am a believer in muscles having "muscle memory" and although I can still go over a hurdle with pretty good form, I believe my muscle memory isn't strong enough to propel me toward a fast time in hurdling. My body knows how to go far. It has done it repeatedly for decades. My body's true muscle memory is in endurance. So, where does that leave me in my athletic life? That's a good question. I'm thinking about it.