My Freshman H.S. Track Coach Taught Me How NOT To Coach! 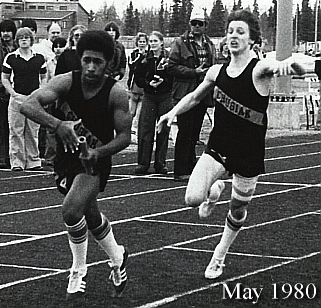 When I was a freshman on my high school's track team in Alaska, I was a sprinter. It was that year when I would learn the magnitude of mistakes that a coach can make.

One of the races that I was a part of as a freshman was the 880-yard relay (now called the "4 x 200-meter relay"). I ran the third leg of the relay, handing off to Craig Johnson, a senior on the team who was very fast. At the end of April 1980 we were competing in the 880-yard relay against some very fast teams. I ran my 220-yard leg of the relay really hard and ended up badly straining -- slightly tearing -- the left quadriceps muscle at the rectus femoris. The strain happened just before I handed off the baton, and after getting it into the hand of the next runner I collapsed onto the infield of the track in serious pain.

My sprint coach immediately understood what happened and told me to lay back and extend my left leg. However, what I would hear from the head coach was absolutely ridiculous. He simply yelled, "Enough dramatics Staso. On your feet!" To say that his harsh and unconcerned response angered me would be an understatement. However, I bit my tongue (nearly off!). I limped through practices the following week, doing more watching from the sidelines than being on the track, and my sprint coach was looking to replace me on the relay for the next meet. However, the head coach told him to keep me on the relay.

The picture shown above was taken in early May 1980, one week following the meet I was injured in. I was 15 years old. I can be seen with my left thigh taped up, trying to hold the muscle in place as I raced my leg of the 880-yard relay. I'm handing off the baton to anchor leg runner Craig Johnson. This particular photo reveals the poor judgment of the head coach... making an injured runner go full speed for 220-yards. I believe my face in this picture says it all (and yes, our relay team lost). It was the last race that I would run in my freshman year because the injury was made worse due to the head coach making me run on that relay rather than taking a little more time to get the leg better. He belittled me in front of the team as I had a serious injury for a sprinter, and he made me run when I shouldn't have -- and yes, there were other sprinters who could have filled in for me. When my season was over due to injury, another sprinter was put into my spot on the relay for the rest of that track season.

So, why am I sharing a 37-year-old story and photograph? Because last week I was at a middle school track meet and was so disappointed to see the poor instruction, or complete lack thereof, by some of the coaches. I first started coaching school runners in 1988 and have seen all sorts of coaching styles over the decades. For example, last week I saw a female 40-something coach that was more concerned about her appearance than her athletes. Her skin had been darkened considerably by hours in a tanning booth. This is early spring in north-central Indiana and we haven't had near enough sunshine yet to get a Hawaii-style tan! She was wearing either a running skirt or a tennis skirt (hard to tell) and was color coordinated from head to toe... even down to her clipboard. Her 8th grade hurdle athletes all had wrong technique/form, yet she would say "good job" after they completed their races. I didn't really see any 'coaching' out of her, but she definitely did a fair amount of chatting with other coaches. Next year, her current 8th grade hurdlers will be in high school and their high school coaches are going to shake their heads and wonder why the middle school coach didn't teach them proper technique. How do I know? Because I've been one of those high school coaches who have had to correct what the middle school coaches didn't.

I understand that many coaches volunteer their time, and that some are teachers who are told by administrators that they have to coach because the school needs someone in the position. However, coaches who are more concerned about their appearance than their athletes... who are more concerned about keeping an eye on the clock for when they get to go home rather than the time their athletes cross the line... and who just want to be the athletes' buddy and not an actual coach... well, they really need to look for something else to do. I always took coaching seriously when I was in the role. My athletes laughed, and they sweated. They were worked hard in practice, and that work showed in track meets. They had fun while being competitive at the same time. They were taught the proper technique for their events so that they could have a solid foundation for future improvement.

I didn't respect the head coach of my high school track team when I was a freshman. He clearly enjoyed being in control and using harsh words and belittlement as a coaching strategy. His discernment when it came to handling an injured athlete was poor and I was fortunate to run track in a different region for my sophomore year -- having a far better coach and experiencing greater success as a track athlete. As someone who has coached an array of track athletes and runners, as young as age 12, I encourage all coaches to take genuine interest in both the sport and your athletes. Do whatever you can to bring out the best in your athletes while coaching proper technique, proper sportsmanship, and proper commitment. Make it fun, make it challenging, and make it a rewarding experience -- regardless of whether they come in first or last across the line. As a coach, you have an opportunity to impact your athletes lives in many ways. Don't take that opportunity and responsibility lightly..

Email ThisBlogThis!Share to TwitterShare to FacebookShare to Pinterest
Labels: Bad Track Coaching, Be An Effective Coach, Coach Injured Runner, Coaching Techniques, How NOT to Coach, How To Be A Good Coach, How To Be A Quality Coach, Poor Track Coaches, Running Injured, Sprinting Injury
Newer Post Older Post Home