Goodbye Running. You Blessed Me With 42 Years of Experiences! 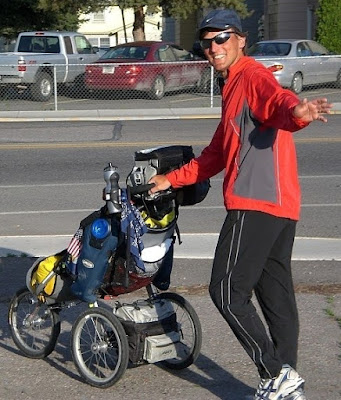 Those of you who have been following this blog know that as I approached 52 years of age last April I began to ponder my athletic life and what might be on the horizon. I retired in November 2016 from running solo across states and countries, and I thought seriously about trying to return to track and field as a hurdler in the USATF masters program. However, with age comes wisdom and as time has unfolded I have come to a conclusion about the running lifestyle I've maintained since the age of 10. After 42 years of striding through track races, road races, and conquering distances across states and countries... it's time for me to say goodbye to running. And, I'm okay with that!

I've logged nearly 50,000 miles of running in my lifetime, which is closing in on two laps of earth. I've done over 5,000 miles of that distance while pushing an 80+ pound stroller over every type of terrain and through just about every weather condition imaginable. I have literally pounded my body into the ground promoting youth health and fitness through a non-profit organization I started many years ago called The P.A.C.E. Fitness Foundation (PACE standing for "Promoting Active Children Everywhere"). I am still the President of that foundation and time will tell what I'll be doing with P.A.C.E. in the future.

Running has given me many amazing experiences and it has been incredibly rewarding to know that I've been able to encourage and/or inspire others through my efforts in the sport. However, it's time to move on... to reach for new mileposts via different means. 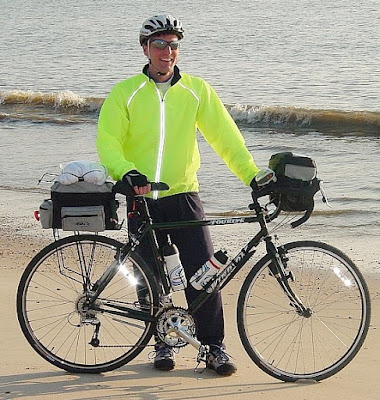 Cycling has always been my favorite cross-training activity. I've bicycled countless miles as I've prepared for solo ultra-endurance adventures. Some of you know that I attempted a solo bicycle trek across America in 2007, but was struck by an inattentive taxi driver — which brought that endeavor to an end. Over the years I've bicycled in various places, such as Alaska; Idaho; Oregon; Montana; Delaware; Maryland; Virginia; Indiana; and elsewhere... often taking advantage of the rails-to-trails pathways. It seems like a logical transition for me to go from running to bicycling. Through my youth fitness foundation, I've promoted walking, running and bicycling to children and formerly teamed with the Safe Routes to School program to encourage kids to walk or bike to school.

Running will always be connected with me. For so many years I've been the "Gotta Run!" guy... loading my stroller with gear and running off toward the horizon. However, I'm 52 and am ready for a new means of reaching for life's adventure mileposts. The means I am choosing is cycling. However, my 'adventures' on a bike seat will not be to the magnitude of the adventures I had while wearing my running shoes.

I know this is the right time to say goodbye to running. I've accomplished all that I truly wanted to, and actually more than I ever thought I would. How many people do you know that have actually run solo across the entire United States, or across Germany, or across the Mojave Desert? I've accomplished running adventures that most people cannot fathom attempting. I don't write that to come across as superior, prideful or arrogant. I am simply well aware of the rarity of what I've done, the blessings I've been given through running, and am fortunate to have experienced success in what I've set out to do. I am at complete peace with leaving the sport of running after 42 years. Physically, I've given running everything I have to give and am fortunate to have survived some of the situations I've been in. Emotionally, running has brought me to the edge many times and has made me a stronger person. Spiritually, running has given me a greater appreciation of creation and has strengthened my faith. Socially, running put me in contact with people of every walk of life and each of them had an impact on me.

I wear many hats in my life. I'm a father; a son; a brother; a fiancé; a friend; an employee; a co-worker; a writer; a speaker; a fitness advocate; and, an adventurer. Throughout my life I've put on the "runner" hat nearly every day. That hat has served me well and I will always look back with fond memories, tremendous gratitude, and a sense of pride in what I was able to do through the strides that I took.

I thank each and every coach, spectator, encourager and supporter who has helped me conquer each and every mile that I've endured as a runner since 1975. Without you, the journey would have been far more difficult and far less sweet. There are many more mileposts in front of me on life's road and I look forward to all that lies between me and the horizon.