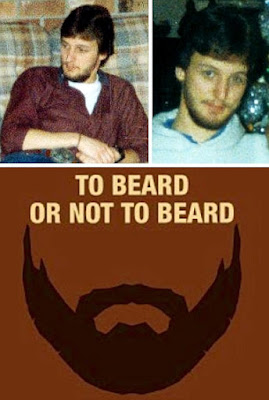 Just before I graduated from college in the late 1980s, I decided to grow a beard. I thought it would make me look older. Then, in 1990, I became a fifth grade teacher and a high school track coach and felt that without the beard I would look no older than the high school runners I was coaching. So, I kept the beard for a couple of years (see accompanying photos). However, when I reached the age of 27, I decided to shave my beard off. Now, nearly three decades later, I'm still clean shaven and haven't had a beard since then.

So, why am I writing on the topic of beards? Last week, I read an article about things that happen to men when they grow beards. The article began with, "Research shows that beards can make guys more attractive, protect them from certain diseases, and help them convey a quiet yet confident sense of masculinity." Wow... all that just because of some facial hair? Then the article launched into some of the "scientific things" that can happen. For instance, of the bearded subjects tested, some had fecal matter in their beards, and some had more bacteria that dogs!

The article went on to say that some studies have shown that men with beards may be seen as more mature and as having higher social status. It's also been reported that men with beards exhibit more dominance. Aside from that, research from the University of Queensland in Australia shows that beards can protect men from 90 percent of harmful ultraviolet rays. As a result, bearded guys may be less prone to skin cancer.

Studies also suggest that bearded men may be more attractive to women, but apparently this depends on whether that woman’s father had a beard. Scientists suspect this may have something to do with sexual imprinting, or the theory that future mate preferences are formed at a young age and modeled after parents. Again, I'm just sharing what I read.

The article concluded on a rather dark note. One study found that infrequent shaving of facial hair was linked with early deaths from all causes, but most notably cardiovascular disease. Researchers suspect that this increased death risk is mainly due to lifestyle differences, because bearded men were more likely to be shorter, less likely to be married, had fewer orgasms (again, that's what was in the article!), and were more prone to smoking.

I've been without a beard for decades and I don't see that changing in the foreseeable future.