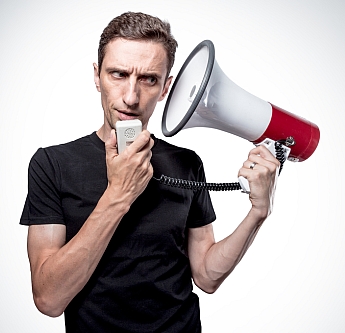 In today's blog post, I'm going to admit to something that I initially denied for quite some time following my solo run across America in 2006. There were times, nearly daily, when I would talk to myself. After the run was over, I did numerous school assemblies and occasionally I would be asked if I ever got bored to the point of talking to myself. For some reason, I thought that if I admitted that I talked to myself people would think I was odd. But then again, I chose to run from one ocean to another pushing a jogging stroller the entire way -- which many people would say is odd in itself!

I've shared before in this blog that I've run the equivalent of at least a couple of laps of the planet. I've spent tens of thousands of miles completely alone in rather desolate locations... running. When you go for many hours without hearing another voice, it's not unreasonable to talk to yourself. So, I admit it. I did in fact talk to myself while running across the country... and other adventure runs that I've done.

A popular urban legend is that talking to yourself is supposedly the first sign of impending insanity. However, age five is when the majority of people begin engaging in out loud, self-directed speech. Within the last several decades, scientists and psychologists have come to understand that talking to yourself is a biological mechanism that better enables humans to shed stress, solve problems, reason through difficult decisions, and concentrate with greater accuracy.

The fairly common habit of talking aloud to yourself is what psychologists call external self-talk. Although self-talk is sometimes looked at as an eccentric quirk, research has found that it can influence behavior and cognition. Many psychologists believe that when we talk to ourselves we're trying to see things more objectively. Therefore, it matters how you talk to yourself. The two types of self-talk most people are familiar with are instructional self-talk -- like talking yourself through a task -- and motivational self-talk, like telling yourself, “I can do this.”

I can tell you that on all of my adventure runs across states and countries I used motivational self-talk. There was nobody around to cheer me on or to encourage me, so in order to accomplish the challenging tasks I had to motivate myself. If I were to add up all of the times I've talked to myself while running endless miles, well... it would be astounding. I retired from ultra-endurance running a couple of years ago and don't talk to myself near as much these days. I prefer genuine conversation with friends and family... engaging with others in a back-and-forth exchange of ideas, thoughts, perspectives and opinions. I've had more than enough days of hearing only my voice.

So, if you talk to yourself now and then don't think that you're stepping toward insanity. You just might be moving toward genius! Even Albert Einstein admitted to talking to himself.