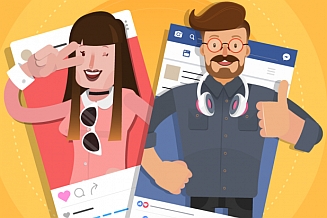 Launched in October 2010, Instagram is a photo and video-sharing social networking service owned by Facebook. It allows users to assign filters to photos and share them with followers. As of August 2019, the most-followed person on Instagram is Portuguese professional footballer Cristiano Ronaldo with over 181 million followers, and the most-followed woman is singer Ariana Grande with over 163 million followers.

Over one billion people use Instagram, and 71 percent of those users are under the age of 35. The average user spends 53 minutes per day on the platform, and an estimated 71 percent of U.S. businesses are on Instagram. What you can also find on the platform are those commonly referred to as "Instagram Models." Being a model on Instagram is growing in popularity, and many young girls are spending an enormous amount of time and effort to get their face and body seen by as many people as possible. The most popular Instagram models have tens of millions of followers.

I'm not much of a social media person, but over the past ten years or so I've seen many young people jump onto social media and chase after as many likes as possible for their posts. I decided to do a little reading into the growing trend of "Instagram Models." Gabrielle Epstein, a 25-year old Australian model, has admitted in articles that she makes more money from posting a single selfie than she would from working for a full week as a 'regular' model. With a little more than 2 million followers and up to 200,000 likes on a single photograph, companies pay her to endorse their products because they know the posts will be viewed by a large audience. The more followers someone has and the more engagement they receive on each post, the more money they can ask companies to pay them. However, the exact agreement is up to the individual person, because there are no set rules.

One Instagram model with over one million followers has said in the media that she charges between five thousand and fifteen thousand dollars per post. However, there are other models who ask companies to pay them one dollar for every like their post receives in addition to a payment upfront.

There are tons of young people hoping to break into the money of Instagram modeling. The thing about being a social media "model" is that it's a title that is typically self proclaimed. There are young girls with only a few hundred followers who call themselves an "Instagram Model." They're not getting paid anything, but are aiming to increase their follower count -- and ultimately become an "influencer."

There are various rules/guidelines that successful/paid Instagram models have to follow, including: making posts edited and flawless; not being completely honest about products they promote; always watching their weight; taking down photos that don't receive enough "likes;" having to tag sponsored posts; and, having to constantly be posting photos that show them with perfect makeup, quality clothes, effective settings, and more. Of course, there are many other rules/guidelines, but those are a few of the major ones.

There is growing concern that social media platforms can contribute to low self-esteem and feelings of inadequacy in young people. In response to this, Instagram recently launched a test in numerous countries (Canada, Australia, New Zealand, Ireland, Italy, Japan and Brazil) of hiding the number of likes on posts. Instagram's goal is to remove the pressure from people regarding how many likes a post receives. Instagram administrators are testing to see if by removing the like feature users will feel less judged. They also want to see if this change can help people focus less on likes and more on telling their story. Of course, the number of likes a post gets is a measure of success or popularity on Instagram. Studies suggest that this kind of instant feedback on content can boost people's self-esteem, but bring others down if they do not get as many likes.

What will Instagram models do if their posts don't show how many people 'like' their makeup, clothes, or exotic location? Maybe they'll find something else to chase after in life other than "likes" of their appearance.