Parent/Child Estrangement -- Among the Most Painful Experiences 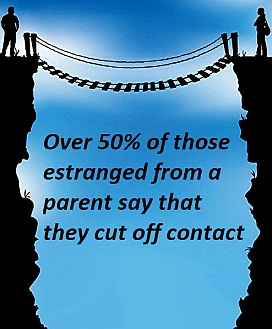 Research out of the United Kingdom has presented some interesting findings regarding estrangement in families. Estrangement is defined as the breakdown of a supportive relationship between family members. Broadly speaking, it is when one or more relatives intentionally chooses to end contact because of an ongoing negative relationship. The UK research participants included parents estranged from their children and children estranged from their parents, casting light on generational estrangement from two different perspectives. Over 50% of those estranged from a parent say that they cut off contact.

When questioned about what they wanted from their parents, adult children said they wanted relationships that were closer, more positive and more loving. Also, they wished that their mothers would be less critical and judgmental, and would acknowledge when they have engaged in hurtful behavior. Adult children wished that their fathers would take more interest in their lives and also stand up to other family members, including their spouses or partners.

Psychology Today printed in 2015 that sometimes an adolescent’s irritability and frustration becomes the adult daughter’s or son’s ruminating anger and resentment -- and the son or daughter opts for absolute distance (physically, emotionally and verbally) from one or both parents. Some studies indicate that 8 percent of adults have ceased communicating with a family member. A 2017 study found that as much as 27 percent of adult children report having strained relationships or no contact with one or both parents. However, family estrangements do not need to be permanent. Even though adult children may say they are unwilling to renew a relationship, statistics show that they are usually willing to give their parents another chance.

There is one fact that is certain -- estrangement from family is among the most painful human experiences.