Vaping Your Life Away -- 215 New Cases of Lung Injury This Summer! 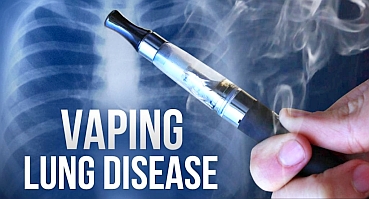 At least 215 cases of severe and mysterious lung illnesses associated with vaping have been identified this summer in the United States. One such case is a 20-year-old man from Utah who vaped every day and almost died from a life-threatening lung injury -- and 'vape juice' may be the cause. An 18-year old woman was forced into a medically-induced coma due to vaping. Her symptoms included severe fever, nausea, body aches, appetite loss, and chest pain -- and she had fat particles growing inside of her lungs that were related to the glycerin in vape juice. Both of these people have said that they'll never vape again. It's suspected that the flavor oils may be causing serious lung issues.

The man from Utah had a case of lipoid pneumonia (a condition caused by fat or oil in the lungs), which quickly escalated into acute respiratory distress syndrome, a life-threatening condition that put him on life support. Health experts suspect that his daily vaping habit may have been at fault, and today he has a 25 percent diminished lung capacity. At least 215 similar lung issues have been reported across 25 U.S. states this summer, according to the Centers for Disease Control (CDC) -- all associated with e-cigarette use. One Illinois man died after vaping in August, and the Illinois Department of Public Health says at least 21 others (ranging from age 17 to 38) are having breathing issues in that state.

Health experts don't fully understand why this is happening, but the CDC says that some of the ingredients in aerosols created by vaping may do long-term damage to the lungs. The Food and Drug Administration has received 80 vape samples for testing. Already, health experts are finding some of the first clues that fat deposits from vaping oil could be part of the problem.

In 2018, a 34-year-old British woman who'd been vaping for three years developed lipoid pneumonia and respiratory failure, similar to the man in Utah. The case suggested that vegetable glycerine in e-cigarettes may be to blame. On its website, the CDC states: "Some e-cigarette flavorings may be safe to eat but not to inhale because the gut can process more substances than the lungs."

An overwhelming majority of young people who vape (81%) say tasty vape juice flavors are a primary reason they use e-cigarettes. According to the US Department of Health and Human services, vapes may contain chemicals like acrolein, which they say can cause irreversible lung damage. However, because the devices are not FDA regulated, all of the chemicals found in vape juice may not necessarily be listed on the packaging.

I've written on this topic before (Cigarettes and E-Cigarettes: Inhaling The Dangerous Facts in September 2016, and E-cigarettes (Vaping) May Contribute to Inflammatory Lung Disease in October 2017). I have a feeling that this won't be my last blog writing about it.