My Parents Have Been Married For 66 Years... And Counting! 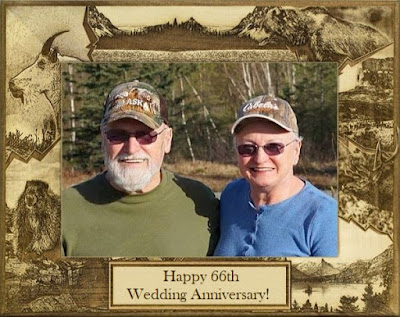 My parents are in their mid-80's and last week they celebrated their 66th wedding anniversary. Both of them are healthy, happy, and enjoying life at their cabin in Alaska. My parents have always been incredibly supportive of me, and I am blessed to be the youngest of their seven children.

Think about it... 66 years of marriage. According to U.S. Census Bureau statistics, only about 5 percent of married couples ever achieve even a 50th anniversary.

My Dad commonly refers to my Mom as his "better half" while she often refers to him as "Doc" -- not because he has a medical degree (which he doesn't), but because he's like Doctor Dolittle in that he likes to talk to, and feed, some of the small wildlife around his cabin.

They became married on a spring Saturday in 1954, the same year that the first nonstick pan was produced! Popular musical artists of that year were Frank Sinatra, Doris Day and Tony Bennett. It was also the year that a hopeful singer named Elvis Presley recorded a 10-minute demo tape in Nashville. Dwight Eisenhower was President of the United States, NY Yankee Joe DiMaggio married actress Marilyn Monroe, and the holiday movie classic White Christmas was released -- starring Bing Crosby, Danny Kaye and Rosemary Clooney. Back then, postage stamps were 3 cents, a gallon of gas was 22 cents, and a loaf of bread was 17 cents. The cost of an average new house was $10,250.00. Finally, it was in 1954 when NBC's "The Tonight Show" first aired, with Steve Allen as the host -- and 1954 was the first year that color televisions were available.

My parents have experienced so much in life, side by side. They are truly each other's best friend and are the the epitome of what a solid, committed marriage should look like. They love each other deeply and I have been blessed for 55 years to watch their partnership on life's road. Happy anniversary Mom and Dad! I love you both.


Note: I just had to share a short message that I received from my Mom after posting this writing. In it, she describes the love she and my father share: "Thank you Paul, for writing such a beautiful blog. Our love gets stronger with each passing day, and we wish we could start out all over again. I also wish everyone could reach the milestone we have, and be completely happy and content after 66 years of marriage. We have been blessed."