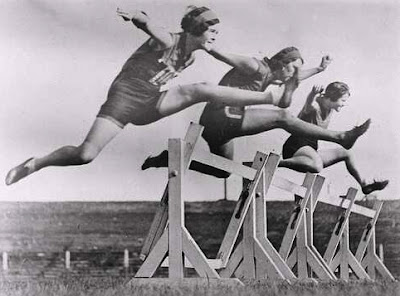 It's believed that hurdling originated in England in the early 19th century, where such races were held at Eton College around 1837. In those days, technique was primitive and hurdlers merely ran at and jumped over each hurdle, landing on both feet. The hurdles were much more of a barrier than they are today. Back then, you couldn't "run through" the hurdles and knock them over. The stationary, heavy hurdle was more likely to knock over the runner!

A major improvement in hurdle design occurred in 1935 with the invention of the L-shaped hurdle, replacing the heavier, inverted-T design. In the L-shaped design and its later refinement, the curved-L (or rocker hurdle), the base-leg of the L points toward the approaching hurdler. When struck, the hurdle tips downward, out of the hurdler’s path.

There have also been advancements in hurdling technique. Experimentation with numbers of steps between hurdles led to a conventional step pattern for hurdlers -- 3 steps between each high hurdle, 7 between each low hurdle, and usually 15 between each intermediate hurdle. Additional refinements were made by Arthur Croome of Oxford University around 1885, when he went over the hurdle with one leg extended straight ahead while at the same time giving a forward lunge of his torso. Croome's technique became the basis of today's hurdling technique.