When is it Time to Retire Running Shoes? 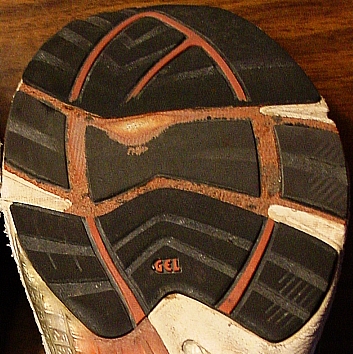 This picture was taken when I was in the state of Illinois during my run across America. As you can see, my running shoes were needing to be replaced! I logged approximately 500 miles on each pair of shoes that I wore during that 3,260-mile run from Oregon to Delaware. However, this pair had 600 miles of wear... after just 3 weeks on the road.

Generally, running shoes should be retired after 300 to 500 miles of use. Why the range? Because how quickly a shoe wears depends on you. For example, if you land hard on your heels with each stride, you're going to wear through shoes more quickly than a more efficient runner. Go by feel. If after a normal run your legs feel as if the shoes aren't providing you adequate protection, they probably aren't. Give your legs a week to make sure it's really the shoes and you're not just tired. If the shoes still feel dead, you should replace them. The majority of runners replace their shoes too late. When you can see white midsole material poking through the outsole or when the sole under the heel looks crushed, the shoes are long past their prime.

Researchers have said that you must change shoes before the ethylene vinyl acetate, or E.V.A., that lines most running shoe insoles breaks down. Bread has been used as an example. Think about a piece of bread fresh out of the bag... light and fluffy. However, if you press it down with the heel of your palm, it's flat with no rebound. That's what can happen to E.V.A. in running shoes.

So, when should you retire your running shoes? Honestly, no one really knows because extensive studies haven't been done. With so many variables — type of shoe, runner’s weight, running surfaces, running style — there may never be a simple answer. My rule of thumb is to not log more than 500 miles on a pair of running shoes. It's just not worth the risk of injury to put more than that many miles on a single pair.