Today is Indeed a "Good" Friday! 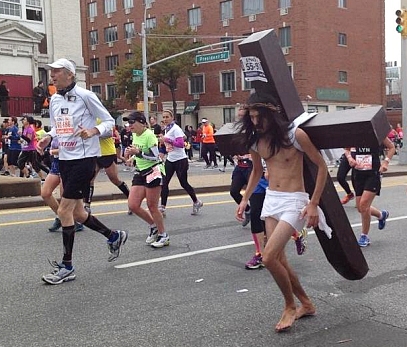 There is a man who has run many marathons carrying a cross on his back, while barefoot, with a crown of thorns. There have been comments online about it being an impressive feat, but there have also been those who have ridiculed and criticized him for it. The Christian runner, from Japan, has been quoted as saying: "I want people to think about the burdens we carry and the burdens Christ carries for us." Regardless of what you may think of him, he is indeed a man running with conviction.

Today is Good Friday. For Christians, Good Friday is a crucial day of the year because it celebrates what we believe to be the most momentous weekend in the history of the world. Ever since Jesus died and was raised, Christians have proclaimed the cross and resurrection of Jesus to be the decisive turning point for all creation. On Good Friday, we remember the day Jesus willingly suffered and died by crucifixion as the ultimate sacrifice for our sins.

With such a moment of sadness, suffering and sacrifice, why is this day known as "Good" Friday? Good Friday is “good” because as terrible as Jesus' crucifixion was, it had to happen in order for us to receive the joy of Easter -- the day Jesus was raised from the dead, showing all people from that time forward his victory over sin and death and giving mankind hope for eternal life.

Wishing each of you a Good Friday and a Blessed Easter.