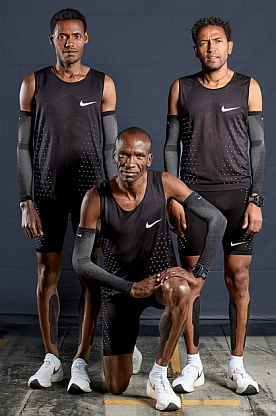 RunnersWorld.com has reported that three of the world’s best distance runners are about to attempt a sub-2 hour marathon. The current world record for men is 2:02:57, set by Dennis Kimetto of Kenya on September 28, 2014 at the Berlin Marathon. For decades men have been chasing the 2-hour barrier in the marathon -- similar to the pursuit of breaking the 4-minute mile, which Roger Bannister did in 1954.

Here’s what you need to know about the sub-2:00 marathon attempt, which is sponsored by Nike:


WHAT: Olympic marathon champ Eliud Kipchoge, two-time Boston winner Lelisa Desisa, and half marathon world record-holder Zersenay Tadese will try to break two hours for the 26.2-mile marathon distance. Of the three, Kipchoge, age 32, is the most likely to go sub-two hours. His personal best of 2:03:05 makes him the third fastest in history on a record-eligible course. The Nike attempt involves only runners sponsored by Nike.

WHERE: The Formula One race track in Monza, Italy. The runners will do roughly 17.5 laps of the 2.4-kilometer circuit.

WATCH: The attempt will be livestreamed at RunnersWorld.com, beginning 15 minutes before the race starts. The stream will also be available on Nike’s Facebook page. The coverage will include commentary from marathon world record-holder Paula Radcliffe and veteran broadcaster Craig Masback, a former elite miler and former CEO of USA Track & Field who now works for Nike.

WILL A WORLD RECORD BE RATIFIED IF THEY SUCCEED? According to RunnersWorld.com: "Given what is currently known about it, most likely not. Nike has strongly indicated that its attempt is focused on producing a sub-two under parameters of its own choosing. One or more aspects of what’s required for a performance to be ratified as a world record are likely to be circumvented. The course used for the attempt will be certified in accordance with rules for record eligibility. In the case of the Formula One oval, that means that the distance will be accurately measured. Because the attempt will occur on a loop course, the other aspects of course eligibility (the separation between the start and finish lines being less than 50 percent of the race distance, and the net elevation drop being less than one meter per kilometer) are automatically met. However, if the runners were to be led the whole way by an ever-changing roster of pacers, or if they drafted off a phalanx of vehicles for 26.2 miles, or if they could receive fluids and other aids on demand, such features would violate current rules of competition."

Nike has looked at every possible element known to affect marathon performance, including weather, course, pacing and nutrition -- as well as shoes and other gear. Nike has created a shoe with a spring plate in the sole to be used in its sub-2 attempt.