Keeping A Promise -- What Does That Look Like In Action? 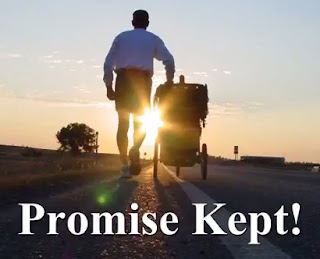 In 2006, I ran 3,260 miles all alone in 108 days simply to keep a promise I had made to 97 elementary children whom I had told I would try to do the 15-state journey. Why did I make a promise like that? I'm going to attempt to answer that question today.

By definition, a "promise" is a commitment to do, or not do, something. It's important to note that you cannot make a promise on something that you are not in control of. Unfortunately, we live in a world where promise breaking seems more common than promise keeping. For example, politicians make promises to help get elected, and all too often break those promises once in office. Couples will make promises to each other and then suffer the consequences when promises are broken. Children will promise to clean their room and get distracted to the point where the promise is easily forgotten.

In September 2005, I stood in front of a group of elementary children and promised that I would try to run across America all alone if they could collectively log the 3,200-mile coast-to-coast distance in PE class before the end of the school year. The run across America challenge that I posed to them had never been accomplished before by an individual elementary class and during the 2005-2006 school year the 4th graders and 5th graders of that school had a friendly competition to see which class, if either, could do it. My promise helped to motivate them. Both grades finished the feat within 9 months and their effort -- and my promise -- put me onto the highways of America during the summer of 2006.

Many times during my U.S.A. run I shared with the media that I was running to keep a promise I had made. It was surprising to me to see the reaction of people across the country. Most simply could not believe that I was putting myself through the physical strain, and at times agony, of running from the Pacific Ocean to the Atlantic Ocean alone while pushing 80-pounds of gear through the second hottest summer ever recorded in America... just to keep a promise. I took over 6 million steps and pounded my body into the ground to keep that promise. It literally took blood, sweat and tears to accomplish. However, in the end I had kept my word. That meant the world to me.

Every day there are people who have genuine and admirable intentions of keeping promises that they have made, but who ultimately fail to act on them. Why do people fail to keep promises? I believe that many times they fail to look at the whole picture... what is truly required to keep the promise they have made. Some begin down the path of keeping their promise, but lose heart if adversity becomes too much or if their interest fades. Some never even intend on keeping the promise that they've made. Keeping a promise can be incredibly difficult at times. Often there is personal sacrifice that must be made and frequently a selfless heart is needed. Why make a promise public? Sharing your promise with others makes you more likely to actually follow through with it and makes you feel accountable to someone else.

I had stood in front of 97 elementary children and promised to try and run alone across America if they could virtually do it first. I then shared that promise with friends, family, and the media. In other words, I truly put myself in the public eye with the promise I made in September 2005. Why did I make that promise? Because it was actually more important to me to try and teach those young students about the importance of keeping your word than it was about the benefits of exercise.

On July 23, 2006, the Washington Times reported: "In a world of broken promises, Paul Staso is a man of his word." The article went on to talk about my promise run across America. I wasn't running to raise money for a charity. I wasn't running to be in a spotlight. I wasn't running for a world record or fame. I simply ran across 15 states to keep my word. That's all. Before my coast-to-coast run began I had been on the receiving end of broken promises. In 2005 I was at a point in my life where I wanted to visually demonstrate to students (and everyone) what a promise looks like in action. I aimed to do that with all 6 million steps I took between two oceans. I hope my effort resonates somewhere in the corners of the hearts of those 97 elementary children... all of whom are now in their early 20's.