Thank You, Meg Penisten, For Encouraging Me To Try! 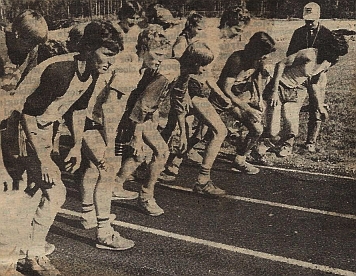 The other day I shared a story of a sprinting injury that I sustained during my freshman track season in high school. Today, I want to share with you a short story from just 4 months following that injury, which would have been August 1980. I was going into my sophomore year at Chugiak High School -- which is just outside of Anchorage, Alaska. Back then, a friend of mine (Meg Penisten) called me up one day and suggested I try out for the cross country team. I had only been a sprinter up until that point, but Meg felt that my body size/type seemed like a good fit for cross country. I decided to give it a try. I figured if nothing else it would keep me fit for track season when I would return to sprinting. What I didn't know is that right after that cross country season at Chugiak High during the autumn of 1980, my family would move away to a different part of Alaska.

During that first season of cross country running I became good enough to run on the varsity team. I was able to get my 3.1-mile course time down to just under 17 minutes on very hilly terrain and qualified for the regional championships. Meg was right... I seemed to be built to run long distances. I last saw Meg back in 1982 when I was at the state track and field championships in Anchorage, Alaska -- 35 years ago. We haven't been in touch since then. Sometimes I wonder if she knows what I managed to accomplish in long distance running with my solo runs across America, Germany, Alaska, and the Mojave Desert. Thanks to Meg, I was encouraged as a 15-year-old sophomore to give cross country running a try. Back then I had no idea just how far my legs would carry me!

In the picture that accompanies this blog post, I am in the front row at the far left. That photo was taken the day before my first cross country competition. Coach Ray Reekie is seen in the cap near lane one and was a wonderful cross country coach. It was his first year coaching at Chugiak High, having transferred from another school in Anchorage. Renee Henry also coached the team and Danny Crow assisted. I learned a lot during that season of running the trails in and around Anchorage. I still have all of the newspaper clippings and my workout log from 1980. It was a privilege to run with such wonderful athletes. Meg finished the girls' season as the 7th fastest cross country runner in the state.

I'll always have fond memories of my one season of running cross country for Chugiak High School. It truly created a foundation for the many miles I would run after 1980. Wherever you are Meg, thank you for encouraging me to try!