My "BOB" Stroller Is Not For Sale, Trade, Bargain, or Free!

A couple of months ago I received a message from an ultra-endurance runner who had read a blog post I made last November about retiring from running across states and countries. Did he congratulate me on my accomplishments? No. Did he have questions for me about how to plan and execute a solo run across a massive land mass? No. Instead, he wanted to know if I was interested in giving up "BOB" (my trusty stroller) because he wanted it.

I'll write this once and I want to make it very clear: MY BOB STROLLER IS NOT FOR SALE, TRADE OR BARGAIN -- AND ESPECIALLY NOT FREE. I used the same stroller to conquer my solo runs across America, Germany, Alaska, and the Mojave Desert. That stroller got me through every mile and although it may not be worth much monetarily, it means a lot to me from the standpoint of what I endured with it.

The stroller is a BOB Ironman Sport Utility Stroller from 2006. Back then it retailed for around $300+ and was considered to be the toughest stroller on the market. Of course, I added various components to it (CamelBak water reservoirs, a solar panel for charging electronics, lights, and more), so it's actually a bit more costly than people may realize. On my run across America website I share some details about BOB and anyone who wants to put their own stroller together for doing an extreme solo ultra-run may learn something from how I set mine up. However, my BOB stroller will not be going anywhere with anyone. And yes... the stroller sits in the corner of a room in my home and looks just like it did after I finished crossing the Mojave Desert in 2011. And for those of you who don't know, "BOB" stands for "Beast Of Burden" -- which it truly was as it weighed about 80 pounds and I had to push it every step of the way! The picture I've posted here is one I took early on during my 2006 run across America. 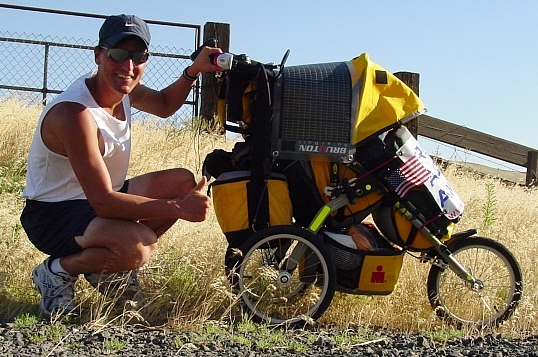