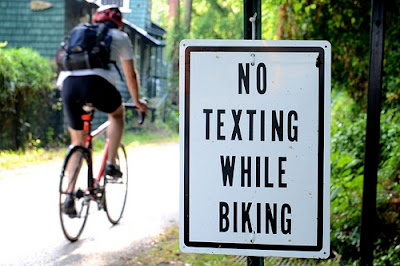 Starting July 1, 2019, a new law in the Netherlands will go into effect making it illegal to call or text while on your bicycle. It has not yet been announced how this will be regulated, but more details are due to be released as the date of the ban approaches. The ban will also be extended to tram drivers and drivers of all vehicles for the disabled. The use of a mobile phones by cyclists was not initially forbidden due to the belief that they were less at risk because they travel at low speeds.

Cora Van Niewenhuizen, Minister of Infrastructure and Water Management, states that using a phone is just as dangerous on a bike as it is in a car, saying, "The fact is that whenever you’re on the road you should be paying full attention and not doing anything at all on a phone."

A recent report showed that last year, 20 percent of bike accidents involving people between the ages of 12 and 25 involved a smartphone. The Netherlands has more bikes (about 22 million) than people (17 million). Almost a quarter of the population cycles every day and bicycle use has increased by about 12 percent since 2005. The average Dutch cyclist now covers more than 600 miles a year.

Opinion polling in the Netherlands suggests that 75 percent of the Dutch believe the "active use" of a mobile phone (calling, texting, playing games, downloading music, posting on social media or using other apps) on bikes should be outlawed, with a majority saying they had witnessed "dangerous situations" involving cyclists and smartphones.