Parents: Don't Let Your Kids Sleep With Electronics in Their Bed 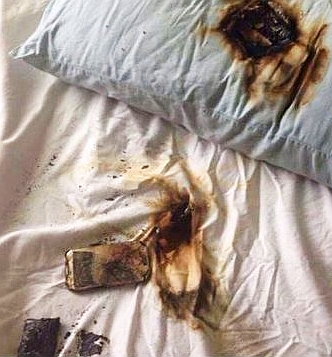 Research has revealed that 53 percent of kids and teens charge their electronics on their bed, or under their pillow. This can cause a dangerous situation in that the heat cannot dissipate and the charger will become hotter and hotter, increasing the risk of starting a fire. Nearly 90% of teenagers have at least one electronic device in their sleep environment and it's important that parents teach them the dangers of having electronics in their bed as they sleep.

There are stories about this across the Internet, such as the Newton Fire Department in New Hampshire posting photos online from a mother whose teenage daughter fell asleep with her phone charging under her pillow. The 16-year-old girl woke up due to a strong odor and realized that her phone was incredibly hot -- too hot to touch! It didn’t smoke or start a fire, but it did leave alarming scorch marks on her pillow.

Another teen wasn't so lucky. In November 2016, one teen's bedroom went up in flames and authorities said that the girl's iPhone was the source of the fire -- having overheated while being left to charge on top of the 15-year-old’s bed.

According to the National Fire Protection Association, smartphones should be charged in locations that allow for adequate ventilation so they don’t overheat. Charging them under a pillow, on a bed, or on a couch doesn’t allow for this. To be safe, adhere to manufacturers’ guidelines: charge on a flat surface with no flammable materials around. If your phone, or other device, does start to overheat, turn it off to help it cool down. If it becomes so hot that you can’t touch it, there’s most likely something wrong with it and you should take it for repair to make sure it’s not a safety risk.

Parents, educate your kids about the danger of sleeping with electronics in their bed.