54 Years and Counting... and Loving Life! 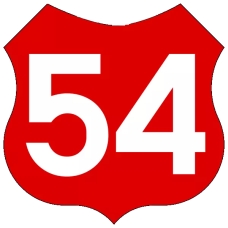 In golf, a score of 54 is referred to as a "perfect round" on a par 72 course. I must say, life is feeling pretty perfect as I reach the 54 mark today.

Exactly 19,723 days ago, my mother and father watched my arrival on earth in a hospital located in Syracuse, New York. I'm blessed to still have them in my life -- although now they are watching me age in pictures from quite a distance... at their cabin in Alaska (about 3,500 miles away from where I live in Indiana).

My birthday is actually on a day of some significant moments in history, such as: Francis Drake completing a circumnavigation of the world in 1581; the U.S. Congress adopting the flag of the United States in 1818; the North Atlantic Treaty Organization (NATO) treaty being signed in Washington, D.C. in 1949; Bill Gates and Paul Allen creating Microsoft in 1975; and, the space shuttle Challenger roaring into orbit on its maiden voyage in 1983 -- the year I graduated from high school.

Another year older, and another year grateful. I'm going to make 54 a good one!